Austrian authorities have designated a Russian diplomat ‘persona non grata’ after accusing him of contradicting the Vienna Convention on Diplomatic Relations. He is accused of conducting espionage with the help of a local citizen. 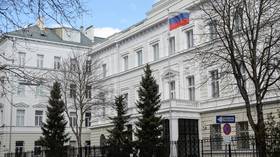 The man, who has not been named, must leave the country by September 1, according to Vienna daily Kronen Zeitung.

“The Russian diplomat carried out industrial espionage in a high-tech company for years with the support of an Austrian citizen,” it explained, adding that the latter had confessed to spying and named a Russian as his handler.

Speaking to Moscow-based news agency TASS, the Austrian Foreign Ministry confirmed the expulsion but refused to offer any details.

As is typical following a diplomatic spat and expulsion, Russia’s Presidential Spokesman Dmitry Peskov announced that Russia would respond to the Austrian move.

The Viennese expulsion is just the latest in a series of incidents this month. On August 11, Slovakia expelled three staff at the Russian embassy in Bratislava for “abuse of visas.” Eight days later, Norway kicked out a Russian representative for engaging in actions “incompatible with the role and status of a diplomat.”