Commercials, the final frontier? A block of lasers that can display advertisements in the sky has been tested in the stratosphere, according to a Russian company. While some may be excited at the prospect, it will offend many. 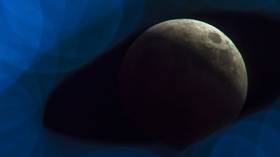 Avant Space says that its “constellation of satellites” will eventually be the “brightest star in the night sky, comparable to the brightness of Venus.” Launched 30km above the ground, the technology underwent testing of its light level, which was completed successfully.

Once the lasers are operational, they will function as advertising space in the sky, allowing companies to illuminate the world’s cities with their branding. With such a vast audience, the company claims that the price of advertising per customer will be far cheaper than TV or billboards.

“Lasers will only be turned on during flight over large megacities and be focused in such a way that light does not go outside the city limits,” the company explained, assuring astronomers that their work won’t be interrupted.

On the company’s website, there are mock-ups of the Nike logo being projected on the sky over Moscow’s Luzhniki Stadium, and the Chanel logo passing by the Eiffel Tower.

Avant Space is based in Moscow’s Skolkovo Innovation Center, a high technology business area akin to the US’ Silicon Valley. Founded in 2009, the center now hosts companies in the IT, energy, medical, and space sectors.