He had two choices: Put his life at the mercy of thugs or risk it to escape from their grasp. According to Russian TV, a Moscow man, who was kidnapped, chose the latter by jumping out of a car as it sped down a busy city highway. 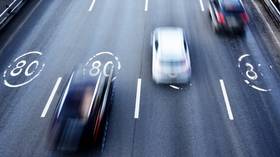 Surveillance cameras captured the breathtaking moment the man leaped out of the trunk of a white sedan going at full speed.

A 35-second video released by Russia’s Ren TV shows the escapee rolling several times, with cars stopping a few feet away to avoid hitting him. He is then seen lying motionless on the road as people approach to help out.

A few seconds into the footage, an ambulance arrives to pick up the victim.

As the broadcaster has learned, the daring escape was the conclusion of a crime drama that unfolded days earlier. The man – accompanied by a friend – was confronted by three individuals who demanded he pay up for a rental car.

The two of them were brutally beaten and thrown into the trunk of a KIA Optima, which took off to an undisclosed location. Faced with a do-or-die situation, the daring man managed to open the truck and perform the death-defying move that possibly saved his life.

What remains unclear is the fate of his companion. The man in the video was taken to the hospital, where he was diagnosed with multiple abrasions and bruises, as well as a skull fracture.

Police have dispatched detectives to inquire into the kidnapping drama, it has emerged.