Coronavirus outbreaks among meat plant workers happen because you don’t want to break the bank paying for your meat, the narrative managers have declared. The implication? Meat should be a privilege, not a right. 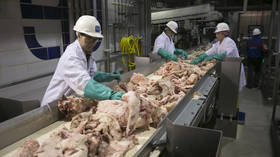 German officials are cracking down on cheap meat in the wake of the closure of a Guetersloh slaughterhouse, owned by leading meat processor Toennies. Some 730 employees at the plant tested positive for Covid-19, and 7,000 people in the district have been quarantined, according to local media.

But the suffering of slaughterhouse workers and their families wasn’t the part that scared agriculture minister Ursula Heinen-Esser – it was the low cost of the meat the facility produced that upset her. “There are hair-raising special promotions where meat is sold well below its value,” she told German outlet Rheinische Post, explaining the state of North Rhine-Westphalia is working on legislation to rein in such horrors.

But retailers have countered that to feed the 13 million Germans who live at or below the poverty line, food – including meat – has to be cheap. Supermarket chain Lidl found that even well-meaning efforts to stock fair-trade bananas failed, as that replacement involved a 20 cent price hike and sent customers scurrying to the competition. What’s a nation to do?

The US has also faced numerous Covid-19 outbreaks in its meatpacking plants, and has been noticeably less subtle about blaming those outbreaks on the consumer, whose desire for cheap meat is framed as the cause of meatpackers’ suffering. “Cheap chicken, beef came at a cost,”USA Todayproclaimed in an accusatory headline last month, detailing the horrific injuries and barbaric conditions employees endure to work in one of the most dangerous industries in the country.

Of course, this is not consumers’ fault. Many Americans (and Germans!) would love to be able to pay more for meat produced and packaged under humane conditions. Large food corporations pay lots of money to lobby for laws that make filming factory farms illegal – so-called “ag-gag laws” – precisely because normal people are horrified when they learn about the medieval conditions under which much of their food is produced.

But millions of people in both countries are barely scraping by as it is, with pandemic-related economic shutdowns having driven unprecedented numbers into unemployment and modern-day breadlines. These people cannot afford to buy organic, and shaming them for their food choices is not going to change their behavior. Paying them more might, as would allowing people to buy directly from small farmers, but neither option is likely to be popular with the megacorporations that all but run the US government.

Instead of policies that help small farmers find markets for their humanely-raised meat, Washington has told them to kill their animals, dump their milk and eggs, and shut it all down.

The US Department of Agriculture even volunteered the services of its veterinarians in case farmers needed help “depopulating” their holdings, and millions of animals have been unceremoniously liquidated. The megacorporations will survive this culling; the small farmers won’t.

Why demonize cheap meat, then? A recent survey by the European Bureau of Consumers’ Unions found lab-grown meat – the kind made by companies like Impossible and Beyond Meat – was about as appealing to consumers as eating insects, i.e. a big “no.” But it isn’t just oligarchs like Microsoft billionaire Bill Gates who’ve invested heavily in ‘frankenmeat’ – JBS and Tyson Foods, the first- and second-largest meat producers in the world, have done so as well.

Lab-grown meat purveyors typically keep their processes secret, but we do know they involve the use of antibiotics, genetically modified yeast, and likely hormones as well – the kind of ingredients people eat organic to avoid.

But if eating a normal burger is equated to forcing Mexican single mothers to labor in a cloud of coronavirus and sadness and gnawing on a chicken leg is likened to chomping on the souls of migrant workers, eating an Impossible burger – or other mystery non-meat – starts to sound pretty appealing by comparison.

As for the bugs, they’re working on that too – a new PlayStation game called ‘Bugsnax’ centers on mysterious “half-snack, half-bug” creatures, gently easing children into the notion of edible insects their parents have historically reviled.