A long Covid-19 lockdown, an economy in freefall and an increasingly authoritarian government are causing mounting resentment among ordinary Colombians. The police killing of an unarmed man was simply the trigger. 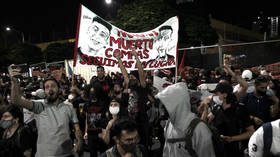 The brutal killing of a father of two at the hands of the police last week in Bogotá ignited spontaneous violent protests across the Colombian capital, exposing a simmering discontent from a population forcibly pent up for months and suffering serious economic hardships due to the coronavirus pandemic.

The government’s response, a vicious crackdown on the protestors, resulted in a further 11 deaths in the city, raising concerns that Colombia’s strained democracy is under assault.

Javier Ordonez’s death may not exactly be Colombia’s ‘George Floyd moment’, but it has disturbing parallels. And the outrage it has provoked is indicative of a deeper accumulated malaise coursing through the South American nation and neighboring countries.

Officers arrested Ordonez for allegedly breaking social distancing rules by drinking with friends, pinning him to the ground and repeatedly Tasering him. Video of the incident showed the 46-year-old begging the officers to stop and telling them, “I am choking.”

While the tragic death of Ordonez should not be diminished, the fury that his death sparked needs to be put into context. The political establishment’s myopia towards the dire situation in their country has caused growing resentment, and people are angry at the disconnection of the governing elites to the struggles of the ordinary Colombian.

Such disquiet simmered before lockdown, and has festered during it. In November 2019, hundreds of thousands of Colombians took to the streets in cities and towns across the country to protest the policies of the government of President Ivan Duque.

While a long list of demands was presented to the president, it was clear that the government’s failure to honour the 2016 peace accords with the FARC guerrillas (Revolutionary Armed Forces of Colombia – People’s Army) and to halt the killings of social and community leaders, which continue unabated, were the principal causes for the unrest. Can long-suffering Colombians be blamed for their anger at a government that has shown itself to be unwilling or unaware of their discontent?

President Duque has failed to act on any of the protesters’ demands. This year alone has seen 55 massacres and the killings of more than 200 social leaders. Colombians have also been subjected to possibly the world’s longest Covid-19 quarantine, despite which the number of infected has reached 710,000, with 23,000 dead and the economy in free fall. There is also concern that the government has taken advantage of the pandemic to concentrate power to the detriment of civil liberties.

Earlier this month, Transparency International, the global coalition against corruption, warned that Duque had appointed loyalists into several key positions of power, stating: “During 2020, people close to the government have been chosen to head the Office of the Attorney General, the Office of the Inspector General, and the Office of the Ombudsman – a situation that carries a serious risk of reducing the independence that these external bodies should have vis-à-vis the executive branch.”

Civil liberties have been repressed and authority concentrated in much of South America in the name of Covid-19 mitigation, causing a chain of dissent across the continent. Demonstrations in Chile fed into ones in Ecuador, followed by Colombia. From there, the outcry spread to Bolivia, and most recently, Peru, where President Martín Vizcarra is being threatened with impeachment. These are complicated times in South America.

Essentially, the 2019 demonstrations in Colombia were placed on hold by the onset of the pandemic and, in the meantime, President Duque’s government has maintained a polarization in the country through its mismanagement of the pandemic and its desire to remain the key ally to the United States in the region. This is both as a counterbalance to the presidency of Nicolas Maduro in Venezuela and to show loyalty to the US-led war on drugs.

Colombia, the death squads & the US’ human rights double standard

Washington’s position is that the aerial fumigation of coca – the crop used to make cocaine – must start again in Colombia to combat its production, despite such action being outlawed in the 2016 peace accords. Bogota is beholden to the US for economic and military aid, which began in 2000. Last month, an updated version of the initiative, called Colombia Crece, or Colombia Growth, was put into action. The government must fully cooperate with President Trump’s policies in order to ensure the flow of the aid.

It is clear, however, that President Duque also looks to the US for political inspiration. “What we have seen take place in Colombia has been the use of the Trump playbook, in order to polarize and…consolidate power, but more mediocrely orchestrated,” said Sergio Guzman, director of Colombia Risk Analysis, in an exclusive interview with RT.com. “In the US, Trump’s vernacular includes a fear-mongering of Antifa, the Democrats, critics of the right to bear arms… and, in Colombia, it’s the same thing, but using the arguments of the FARC guerrillas, the left-wing politician and runner-up in the last elections Gustavo Petro, former president Juan Manuel Santos, and the specter of Venezuela.”

This application of a binary political model has been incredibly damaging for Colombia, reducing debate to nothing more than left vs right – or, in the national context, leftist politician Gustavo Petro versus right-wing former president Alvaro Uribe. The center has been silenced, as Petro calls for his supporters to take to the streets in protest and Uribe demands that the streets be militarized. Both are acting irresponsibly and creating a political thrombosis from which Colombia will be unlikely to emerge before the presidential elections tabled for 2022.

Colombia’s Minister of Defense has since apologized for the killing of Ordoñez, but it was too little and too late as a message of contrition or conciliation, and rather than mourning the death of one civilian, Colombians are now mourning the deaths of 11. Unrest is likely to continue in Colombia and neighbouring South American nations, and any further action perceived as an injustice could again serve as a catalyst for further dissent. 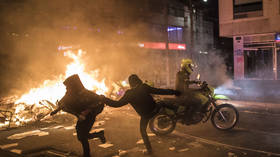 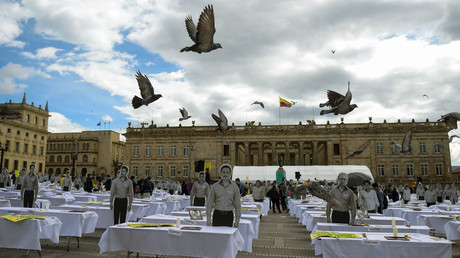