A united Ireland will not mean healing and reconciliation for many people in Northern Ireland. For some it will mean pain, sadness and trauma, writes Sarah Creighton.

As part of The Good Information Project we are posing the question this month ‘What could a shared island look like?’. Sarah Creighton joins the discussion to offer a unionist perspective, warning that the issue is more complex than winning a border poll.

A UNITED IRELAND. The union. These days, the constitutional question is on the tip of everyone’s tongue.

As I sit down to write this, the New York Times and Washington Post have just published half-page adverts from American supporters of Sinn Féin in its paper.

The tagline says, “A united Ireland-let the people have their say.” It tells the reader, “With your support, we can be the first generation of Americans to visit a free and United Ireland.”

For multiple reasons, I don’t want a united Ireland.

Thanks to the Good Friday Agreement, Northern Ireland’s future will be decided by the people. It’s not up to Americans.

I mention the advert because of its language and imagery. It says the rights of unionists are “guaranteed” and it “will be a welcoming home for all”.

“Be the first Americans to step foot in a free, united Ireland.” 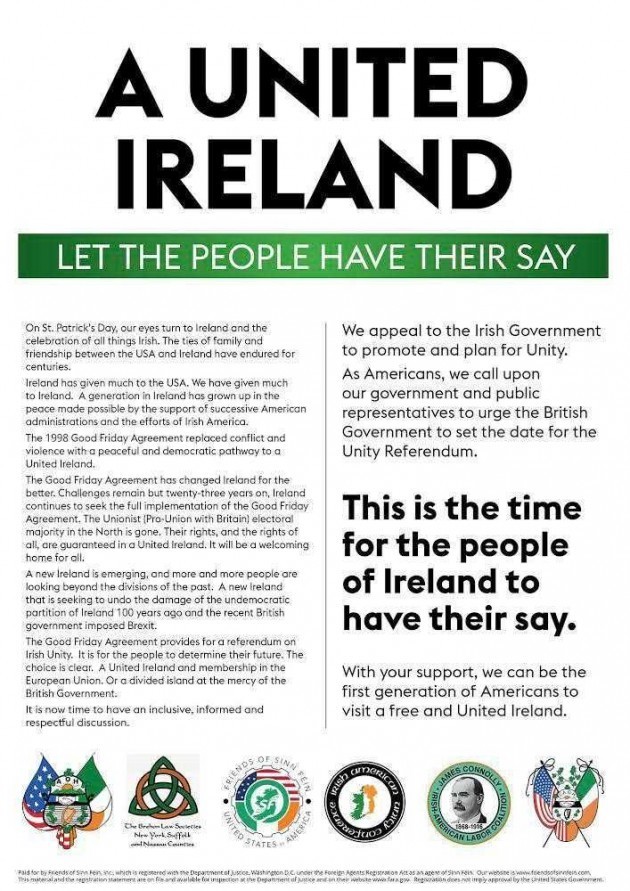 The words are aspirational, certainly what campaigners for a united Ireland would like to see in the future.

They make me think about the difference between dreams and reality, what people see in the future and what they’re going to get.

To quote a recent contributor to the Shared Island platform, a united Ireland wouldn’t mean Brits Out but Brits In.

Most people in Northern Ireland know this. Does America?

Is the Republic of Ireland ready to talk about that fact? Reunification is often pitched as a new country.

We won’t know what that means until/if a border poll is called. A new country could equate to a new flag, a new anthem and a new government.

A very popular sketch by a comedian from Cork did the rounds on Twitter a few weeks ago.

Loyalism, but in a house share in Cork pic.twitter.com/WNDGegEzmA

In it, a loyalist flatmate is offered the chance of moving into a new flat-share with a character representing Ireland.

The sketch is a joke at the end of the day, but people said it delivered a few home truths. I’m not so sure.

Would the Irish flatmate really welcome the loyalist if the loyalist asked Ireland to knock the house down and start again?

Is the Irish flatmate prepared to repaint the house, move the furniture around and give the loyalist something better than an attic? He didn’t offer.

A united Ireland would mean over a million northerners voting and participating in civic life in the south. That will change the Republic forever.

Northern nationalists, republicans, unionists, loyalists and the “others” will get to have a say in how the Republic is run and governed.

If people don’t like the look of DUP in Northern Ireland, are they happy to have them in government in the south alongside Fianna Fáil or Fine Gael?

People in the Republic often look at Northern Ireland and think, understandably, “Christ, look at the nonsense up there.”

Well, my friends, if Northern Ireland joins the Republic then our madness becomes your madness. I hope Claire Byrne likes talking about parades, emblems and flags on a semi-regular basis.

People say a united Ireland would be a moment of healing for the island. I’ve no doubt that would be case for nationalists and republicans in Northern Ireland.

For them, partition meant loss, separation and trauma. Reunification will be a huge moment for many people. It’s not going to be straight forward.

The irony wasn’t lost on me. Everybody I met at the New York event was friendly and welcoming. It was pure Irish America – bold, loud and enthusiastic.

The Americans have a romantic view of the island of Ireland and its destiny.

When they imagine stepping foot in a united Ireland, what sort of Ireland do they envision? Do they see someone like me? I’m not sure the issues I’ve highlighted are given much consideration.

“A New Ireland is emerging, and people are leaving behind the divisions of the past,” says the advert.

Painting people who support Irish unity as forward-thinking and supporters of the union as backwards and regressive is quite the take.

No matter what happens with Northern Ireland’s constitutional future, the hard work to build upon the promises of the Good Friday Agreement must continue. It doesn’t stop and end with a border poll.

If we forget that, we’re nowhere.