Over 320 ships are backed up waiting to traverse the waterway after the Ever Given became stuck last week. 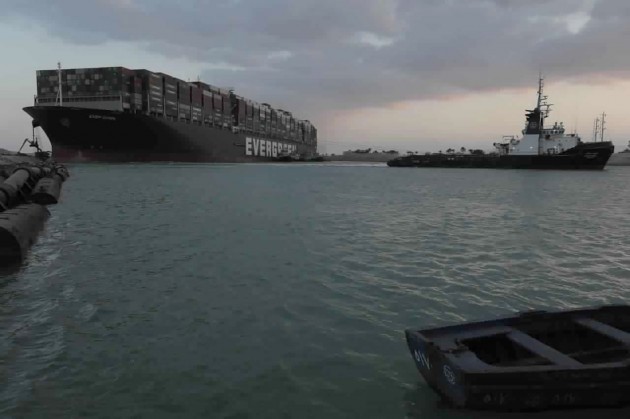 Tug boats work to free the Panama-flagged, Japanese-owned Ever Given

THE STRICKEN SHIP blocking the Suez Canal was “partially refloated” in the early hours of this morning, according to a canal services firm.

Leth Agencies said the modest breakthrough came after intensive efforts to push and pull the MV Ever Given with around 10 tugboats while vacuuming up sand underneath the ship with several dredgers at high tide.

Leth was unable to immediately provide further details about when the vessel would be entirely set free, saying it was awaiting confirmation of the partial refloating from the Suez Canal Authority.

Authority chief Osama Rabei said workers had continued “pulling manoeuvres” to refloat the vessel early today. Satellite data from MarineTraffic.com showed the ship in the same position, surrounded by a squadron of tugboats with its bow stuck in the canal’s eastern bank.

Efforts to free the Ever Given were set to intensify through today, as more than 320 ships waited to use the vital waterway and major shipping firms increasingly diverted their boats around the southern tip of Africa out of fear of prolonged delays.

The Panama-flagged, Japanese-owned ship that carries cargo between Asia and Europe became stuck in a single-lane stretch of the vital waterway on Tuesday.

Authorities had been unable to move the vessel, and traffic through the canal — valued at more than $9 billion a day — was halted, further disrupting a global shipping network already strained by the coronavirus pandemic. 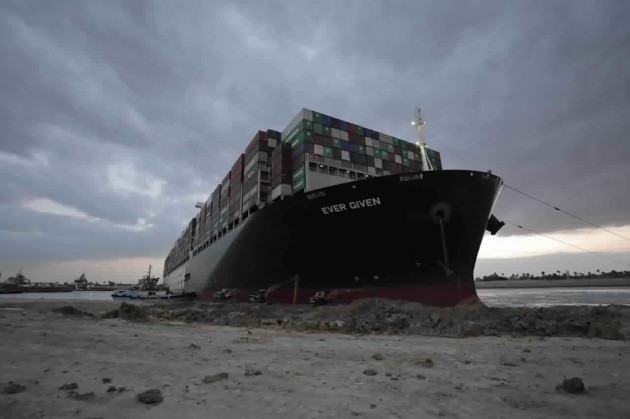 The Ever Given on Sunday

The Dutch-flagged Alp Guard, a specialist tugboat, arrived at the location on Sunday, according to the stuck ship’s technical management company, Bernard Schulte Shipmanagement. The Italian-flagged tug Carlo Magno was also close, having reached the Red Sea near the city of Suez early yesterday, satellite data from MarineTraffic.com showed.

The tugboats, along with at least 10 others already there, were to be deployed to nudge the quarter-mile-long Ever Given as dredgers continue vacuuming sand and Excavators dug at the eastern wall of the canal on Sunday, hoping to free the ship’s bulbous bow. More dredging equipment was set to arrive by tomorrow.

Officials have been desperately trying to avoid unloading the vessel, which likely would add even more days to the canal’s closure. Taking containers off the ship would require a crane and other equipment that have yet to arrive.

On Saturday, the head of the Suez Canal Authority told journalists that strong winds were “not the only cause” for the Ever Given running aground, appearing to push back against conflicting assessments offered by others. Osama Rabei said an investigation was ongoing but did not rule out human or technical error.

Bernhard Schulte Shipmanagement maintains that their “initial investigations rule out any mechanical or engine failure as a cause of the grounding”. However, at least one initial report suggested a “blackout” struck the hulking vessel carrying some 20,000 containers at the time of the incident.

Rabei said he remained hopeful that dredging could free the ship without having to resort to removing its cargo, but added that “we are in a difficult situation, it’s a bad incident”.

Asked about when they expected to free the vessel and reopen the canal, he said: “I can’t say because I do not know.”

Speaking yesterday to the pro-government Egyptian television channel Extra News, Rabei said Egyptian President Abdel Fattah el-Sissi had ordered the canal authority to prepare for all options, including taking containers from the vessel. He said officials had been in talks with the US about that possibility, without elaborating.

Shoei Kisen Kaisha Ltd, the company that owns the vessel, said it was considering removing containers if other refloating efforts failed. 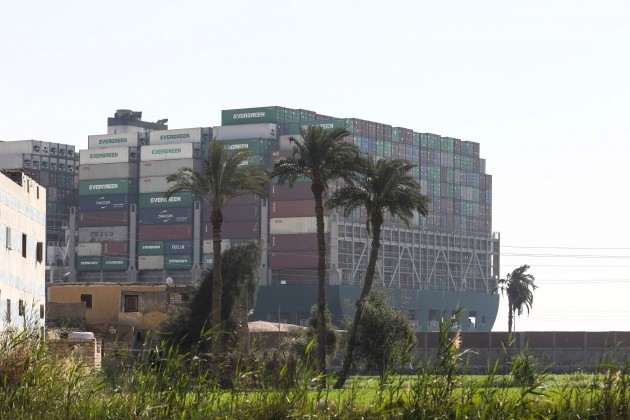 The Ever Given became wedged some 3.7 miles north of the canal’s Red Sea entrance near the city of Suez.

A prolonged closure of the crucial waterway would cause delays in the global shipment chain.

A prolonged closure could affect oil and gas shipments to Europe from the Middle East. Already, Syria has begun rationing the distribution of fuel in the war-torn country amid concerns of delays of shipments arriving amid the blockage.

As of early yesterday, more than 320 ships were waiting to travel through the Suez, either to the Mediterranean or the Red Sea, according to Leth. At least 10 of those vessels carried livestock, raising concerns about the animals. Rabei told the Saudi-owned satellite news channel Al-Arabiya that authorities planned to offer provisions to help them.

Dozens of others still listed their destination as the canal, though shippers increasingly appear to be avoiding the passage.

The world’s biggest shipping company, Denmark’s AP Moller-Maersk, warned its customers that it would take anywhere from three to six days to clear the backlog of vessels at the canal. Already, the firm and its partners have 27 ships waiting to enter the canal, with three stuck in the waterway itself.

“We have until now redirected 15 vessels where we deemed the delay of sailing around the Cape of Good Hope at the southern tip of Africa equal to the current delay of sailing to Suez and queuing,” the shipper said.