Russia’s largest party may be about to back the launch of a minimum guaranteed income for all citizens, in a major policy shift. Dmitry Medvedev says the move could be a way to preserve social harmony in a post Covid-19 world. 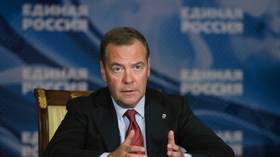 Medvedev, who has been both Russia’s president and prime minister, says the pandemic has caused him to reassess how the government deals with the financial security of citizens.

Speaking at a United Russia digital meeting on Tuesday, Medvedev called it necessary to analyze “approaches to new structures” that already exist in other nations, noting that the crisis has shown the importance of the state’s ability to provide people with stability.

The former president’s proposal is known as universal basic income (UBI), and is an overarching social security system in which the government provides a certain amount of money to every single citizen each month. The aim of UBI is to ensure that everyone has enough money for basic subsistence living.

At the online conference, Medvedev described UBI as an “inviolable minimum amount of funds” paid by the state to each person, “regardless of their type of activity and socio-economic status.”

While UBI is not a well-known concept in Russia, Medvedev is not the first person to advocate its introduction. On Monday, Andrey Kutepov, the Head of Russia’s Federation Council Committee on Economic Policy, wrote to presidential assistant Maxim Oreshkin suggesting that the country adopts UBI as an experiment providing each Russian with an income three times the subsistence minimum. This amounts to just over 35,000 rubles ($460) a month. Adjusted for purchasing power parity, that would equate to $1,361 at OECD rates.

Although the idea of a guaranteed income has existed for a while, it was thrust into mainstream prominence in 2019, when Andrew Yang, seeking the US Democratic Party presidential nomination, made it the signature policy of his platform.