As experts admit that many of the strictest pandemic responses may have been useless, even detrimental, to the countries adopting them, those who’ve gained a sense of meaning from Covid-19 only cling tighter to the regulations. 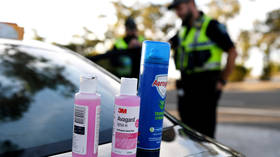 After six months of devastating economic shutdowns, imposed without scientific backing and in spite of expert warnings they’d do more harm than good, even the mainstream media is quietly acknowledging that lockdowns “may have been a huge mistake,” as the New York Post sheepishly put it. The Wall Street Journal argued last week (in what it preposterously called “new thinking on Covid lockdowns”) that shutting down the country for a virus with over a 99 percent survival rate was “overly blunt and costly.”

And it’s not just lockdowns that are being publicly re-evaluated. The New York Times recently admitted as many as 90 percent of those who tested positive for Covid-19 using the “gold standard” PCR method (which spawned a phony whooping cough ‘epidemic’ in 2006 and whose inventor warned it should never be used diagnostically) “carried barely any virus” and shouldn’t be considered infectious. Public health officials in Denmark and the Netherlands, forced to explain their “failure” to recommend mask-wearing, bewilderedly pointed out (in the words of Dutch Medical Care Minister Tamara van Ark) “there is no evidence of a medical effect of wearing face masks.”

The justification for draconian pandemic control measures, in other words, is falling apart. Yet the same media beginning to grudgingly report these facts, as well as public officials and social media influencers, continue to trumpet the ever-higher case counts on a daily basis, as if they hadn’t just read (or published!) that the method of counting is hopelessly flawed. The public shaming of ‘anti-maskers’ has only grown with the evidence that masks do not protect against viral transmission, with some officials even calling for masks to be worn at home. And the Australian state of Victoria is in the midst of the harshest lockdown seen outside the pandemic’s origin, Wuhan, despite having recorded just 221 deaths with the virus when it was imposed. Meanwhile, UK Health Secretary Matt Hancock warned Brits to expect “very extensive” local lockdowns come winter as PM Boris Johnson banned gatherings of over six people.

What’s causing this cognitive dissonance? For many of the most strident supporters of harsh measures with questionable scientific basis, following an ever-growing list of pandemic-related rules has given them something reliable to cling to in a nightmarish sea of uncertainty. Lacking any real direction in life, they may have had a job or career pre-coronavirus, but it was unfulfilling. Their lives lacked meaning. Excelling at Covid-19 rule-following has filled that hole most spectacularly.

Is Covid-19 our new religion, and the face mask its cross?

Becoming an expert pandemic rule-obeyer has a low barrier to entry, after all. It doesn’t take a genius to sport a face-covering at all times, even (especially!) while jogging alone, driving solo in one’s car, or relaxing on the beach. There’s no professional certificate required to harangue the unmasked for “killing Grandma.” Years of practice or study are not required to phone a coronavirus tip line to report a surfer enjoying the waves or a group of college students having a party. Innate talent isn’t needed to compulsively glob out hand sanitizer every five minutes. But the combination of these rituals and the all-consuming fear generated by the initial reports of a terrifying virus causing people to drop dead in the streets of Wuhan – even if it wasn’t substantiated by lived reality – has congealed into a potent modern-day religion that is still finding converts among the alienated, desperate masses.

Even the US National Institutes of Health – the domain of Anthony Fauci, the closest thing this cult has to a saint – has put away the temperature guns, calling entry screenings “notoriously inaccurate.” Management consultants like Deloitte are advising businesses to perform “frequent cleanings” not for health benefits but “to build consumer trust.” The key word here is “perform,” as it’s become clear that much of the official response to coronavirus was – like the airport ‘security theater’ of body-scans, pat-downs and explosive swabs rolled out in the wake of the 9/11 terrorist attacks – done for appearances’ sake.

But just as the Transportation Security Administration’s gropings and nude body scans can’t actually keep an airport safe, living in a facemask and drenching the world in Lysol can’t keep a human being healthy – and may actually do the opposite, both physically and psychologically. Health experts have long warned that ‘masking up’ provides a false sense of security not commensurate with the protection masks offer. But the psychology of the coronavirus rule-follower is a pathos unto itself, as the Washington Post inadvertently revealed in quoting a 67-year-old Florida woman eager to describe her safety routine.

“Before delivery is left on my doorstep, I put on my gloves, and I put on my mask,” the Fort Lauderdale resident explained. “Bag by bag, I unpack a little bit at a time, spray it down and disinfect everything, wipe it all down real good, and put it away. I wipe down all my counters that the groceries have touched. And then I go back and wipe down my front door and my door handles, and refrigerator door, and counter handles, and pantry door.” A year ago, this woman’s relatives might have phoned a local hospital for a wellness check. Now, they’re likely congratulating her on her Covid-19 management skills – or keeping their concerns quiet lest she report them.

These are the people who have everything to lose if the world suddenly comes to its senses, ditches the lockdowns, puts away the cleaning products, and takes off the masks. Their most visible representatives may be the shrieking ‘Karens’ who condemn bare-faced children to death in grocery stores, but for every one of those who makes it onto social media, thousands more sit at home, endlessly wiping down surfaces, the only outward sign of their troubled souls a ‘Wear a Mask’ tag in their Twitter handle. These people will go to great lengths to avoid a return to the ‘old normal’, when they were just another (unmasked!) face in the crowd.

The media loves the rule-obeyers – they’re the best captive audience a cable network could ask for! – and the government appreciates their willingness to enforce even those dictates that adversely affect their quality of life. So it’s up to their loved ones to talk them off the ledge and remind them there is meaning outside following someone else’s rules. Their lives, and ours, may depend on it. 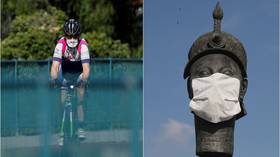