Massachusetts Senator Ed Markey has called for police to be deprived of weapons as mobs run riot across the US. This is immoral and irresponsible. 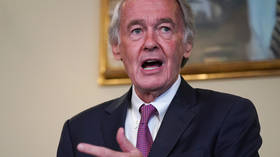 The Democratic Party, for reasons best known to itself, seems to be running an internal competition to see which one of its candidates can display the most stupid attitude towards the police. In the wake of protests from Black Lives Matters, they are writing off every police department in America as essentially an evil force of oppression, rather than acknowledging the need for reform while still standing with the boys and girls in blue.

From sea to shining sea, law enforcement officers in the United States are being denounced left, right and center (or should that be left, left and left?) by Democrat candidates. Biden has conceded that the police are systemically racist, Ilhan Omar, Ayanna Pressley, AOC and others have called for cop shops across the land to be defunded, and Kamala Harris went to Wisconsin to visit the family of Jacob Blake, an alleged sex criminal who reached for a knife as he was being arrested and was consequently shot by officers.

Noticeably she has made no such effort to visit the two LA police officerswho were victims of an unprovoked assassination attempt in Compton last weekend. One might think it odd for a California senator to visit a criminal’s family in Milwaukee rather than law enforcement officers in her home state, especially when said senator used to be the state’s Attorney General. But not in 2020.

The latest Democrat to come out with an unequivocally cretinous policy suggestion regarding the police is Massachusetts senator Ed Markey. Clearly emboldened after beating a Kennedy in his primary, he is now clamoring for national relevance by giving his opinion on policing in the USA. Markey’s suggestion is that now is a good time to “disarm” the police.

What a sterling idea that is. At a moment of national unrest, in a country with the most heavily armed citizenry in the world, during a year when 34 officers have been deliberately killed by gunfire in the line of duty, Markey wants to deprive them of a means of defense.

To be fair to the senator, he doesn’t want to deprive cops of all weaponry, just the “weapons of war” they are apparently swanning about the nation with. Sticking his nose in on matters concerning the riot-ravaged city of Portland (over 3,000 miles away from Massachusetts, incidentally) he tweeted: “Portland police routinely attack peaceful protestors with brute force. We must disarm these officers, and every other police department in America, of weapons of war, and enact a nationwide ban on tear gas, rubber and plastic bullets, and bean bag rounds.”

Portland police routinely attack peaceful protestors with brute force. We must disarm these officers, and every other police department in America, of weapons of war, and enact a nationwide ban on tear gas, rubber and plastic bullets, and bean bag rounds. https://t.co/PDZcjhmSLB

I’ve no idea what ‘war’ movies Mr Markey has been watching, but his choice of words is rather dramatic. After, all I was very much under the impression that soldiers in conflict tended to use live ammunition rather than rubber bullets and bean bag rounds. Tear gas, I would also wager, is rather low down the list of modern military weapons used in the field, especially by the US military, which, under Barack Obama’s tenure, favoured drones and Hellfire missiles.

Markey also failed to suggest what other methods officers trying to contain a riot should use in lieu of these tried and tested measures. Presumably, he’d favor bringing in social workers to try to orchestrate some sort of group therapy over megaphones to the mob, if they could be distracted from setting stuff on fire and liberating Louis Vuitton handbags long enough to listen.

Markey’s nonsense suggestions echo those of Portland’s pathetic Mayor Ted Wheeler, who recently directed the city’s police department to stop using CS gas against the “peaceful” protesters who have turned the city into a warzone virtually every night since May 25. Mayor Wheeler was probably put off tear gas after he decided to virtue-signal to the mob and expose himself to it in a pitiful display that resulted in him fleeing as a horde of leftist thugs called him a fascist.

Oregon State Police have said that Wheeler’s order was  “reckless and short sighted,” while Portland Police Bureau described it as dangerous,stating, “Banning the lawful use of CS will make it very difficult to address this kind of violence without resorting to much higher levels of physical force, with a correspondingly elevated risk of serious injury to members of the public and officers.”

I know that the Republicans have branded themselves as the party of law and order, but it doesn’t follow that the Democrats have to actively come out as the party of lawlessness. Their irresponsible rhetoric regarding policing in America is almost certainly stoking the fires of racial tension across the country.

Their wholesale acceptance of BLM’s revolutionary social justice agenda is irresponsible and dangerous. It is presumably for this reason that the largest police union in the US, The Fraternal Order of Police, has formally endorsed Donald Trump’s campaign.

Joe Biden’s run for office is one of the most cynical I can remember; it appears to essentially consist of blackmailing the electorate with violence. ‘Vote for me and the riots will stop’ is the message, which ignores the fact that the rioting is taking place in Democrat-run cities that refuse aid from the federal government and denounce it as an ‘occupation’ when it is sent in anyway.

Americans should resolutely refuse to be cowed into submission by the persistent threat of leftist violence, and Democrats, like Markey, should be ashamed of the way they are helping to fan its flames.