Russia’s Foreign Ministry has slapped down American and British claims that Moscow has been testing a new anti-satellite weapon. It says the pair are simply trying to distract attention from their own attempts to weaponize space. 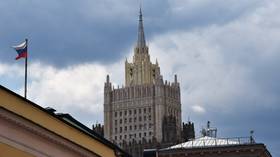 US Space Force Command Chief General John W. Raymond claimed on Thursday that Moscow had conducted a “non-destructive test of a space-based anti-satellite weapon,” and that Russian “aggression” in space justified the establishment of the US’ new space agency. He was promptly backed up in his claims by British officials.

In a statement on Friday, the Russian Defense Ministry said the fresh claims are part of a “targeted information campaign” aiming to “discredit Russian space activities” and Moscow’s efforts “to prevent an arms race in outer space.”

American and British officials are presenting the situation “in a distorted manner” to “justify steps they are themselves taking” to deploy extra-planetary weapons and to win more funding for these purposes, the statement said.

Ironically, it added, the accusations come despite the fact that both Washington and London run programs aimed at enabling their own satellites to be used as weapons to target other spacecraft.

Moscow also pointed to the suspicious timing of the latest “anti-Russian jab,” which came just days ahead of a Russian-American meeting on space security, scheduled to take place in Vienna, on Monday. The ministry said it hoped the accusations were not an attempt by the US side to “complicate the establishment of dialogue.”

The statement confirmed that on July 15, a Russian inspector satellite performed a check of another Russian satellite with the use of special equipment, which it said was fully in line with international law.

The ministry urged its US and British colleagues to refrain from “propagandist fakes” in the future and start working with Russia on the issue of space security.