The United States has called for the “immediate release” of Paul Whelan, who was jailed today for 16 years for espionage. The 50-year-old citizen of the UK, US, Ireland, and Canada has been in Russian custody since December 2018. 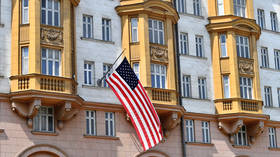 A statement published by the US Embassy in Moscow, and signed by Secretary of State Mike Pompeo, said the US is “outraged by the decision,” citing the secretive nature of the hearing, “with secret evidence, and without appropriate allowances for defense witnesses.” According to Pompeo, the US believes Whelan was deprived of a fair trial.

Outraged by the decision today to convict Paul Whelan on the basis of a secret trial, with secret evidence, and without appropriate allowances for defense witnesses. Paul’s treatment by Russian authorities continues to be appalling, and we demand his immediate release.

“The treatment of Paul Whelan at the hands of Russian authorities has been appalling. Russia failed to provide Mr. Whelan with a fair hearing before an independent and impartial tribunal; and during his detention has put his life at risk by ignoring his long-standing medical condition; and unconscionably kept him isolated from family and friends,” the statement said.

Whelan, a former member of the US military, was arrested in late 2018 after accepting a USB memory device which included classified information. Whelan claims that he was set up. According to news reports from last year, the man with multiple nationalities has been tracked by the Russian security services since his first visit to Russia in 2007.

In tweets posted to the official account of Rebecca Ross, the US Embassy’s spokesperson, US Ambassador Sullivan called the trial an “egregious violation of human rights.”

Ambassador Sullivan: Today, #PaulWhelan was convicted and sentenced to 16 years in prison in Russia. This secret trial in which no evidence was produced is an egregious violation of human rights and international legal norms. @mfa_russiapic.twitter.com/cPCh3Sflfn