One of Russia’s more colorful regional heads, Mikhail Ignatyev, has died after being diagnosed with Covid-19. The former top official in Chuvashia was fired from his job earlier this year following a host of embarrassing scandals. 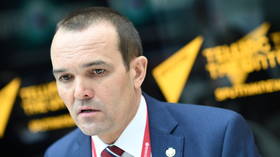 In January, Ignatyev was heavily criticized after calling for critical journalists to be “wiped out.” His next gaffe came later that month, when he was filmed humiliating a local firefighter. During a presentation ceremony for new fire trucks, Ignatyev held a set of keys over the head of a fireman, making the emergency services worker jump in the air to collect them. He was removed from his post just days later.

Last month, he started proceedings to sue President Vladimir Putin for alleged unlawful dismissal. Ignatyev, who passed away aged 58 on Thursday, had been in a St. Petersburg hospital suffering from coronavirus. He died of heart failure following a “massive heart attack,” complicated by bilateral pneumonia.

Putin’s spokesman Dmitry Peskov said the death was “certainly very sad news,” but stated that the authorities have no plans to publish a special statement.

In May, Ignatyev made international headlines after becoming the first regional leader to ever legally challenge a dismissal by Putin. The president sacked the Chuvash head due to a “loss of confidence” after a series of well-publicized gaffes.

The Governor of Chuvashia, Mikhail Ignatiev, has just been expelled from the ruling “United Russia” party. Last week, he forced a firefighter to jump for keys to a new fire-engine. A few days earlier, he suggested “wiping out” unfriendly journalists. pic.twitter.com/jY2vRTpF15

According to the website of Russia’s Supreme Court, Ignatyev filed a challenge to his dismissal on May 26. The case was due to be heard on June 30. By the time the lawsuit was filed, Ignatyev was already in hospital with Covid-19 and severe pneumonia, newspaper Kommersant reported.