Ukraine’s State Bureau of Investigation has summoned President Volodymyr Zelensky’s former administration head for questioning, after suggesting that the government has a secret agreement with Russia to normalize relations. 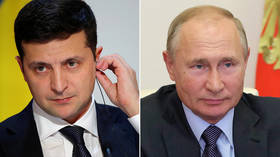 Speaking to journalist Dmitry Gordon, ex-chief of staff Andrey Bogdan said that the Zelensky administration, under current head Andrey Ermak, had made a number of promises to Russia, including dealing with Crimea’s status, re-starting flights between Ukraine and Russia, and prisoner exchanges. Although he did not claim to have seen the promises himself, Bogdan said that he heard about the document from a number of diplomats and intelligence officials.

According to their website, the country’s State Bureau of Investigation has sent the former official a summons for an interview to “verify the facts,” due to their “public significance.”

Bodgan, who headed Zelensky’s office from June 2019 to February 2020, also criticized the government’s current trajectory, saying that the administration will fail to create peace in Donbass and will struggle to improve the country’s economy.

Zelensky, a former comedian and actor, became president in May 2019. Despite falling popularity, he remains the country’s most popular politician, with a July 2020 Razumkov Center poll showing that 25.6 percent of Ukrainians would vote for him now, ahead of former President Petro Poroshenko (13.7 percent).