The Anglo-American press is difficult to understand. Anonymous sources are treated as gospel – when they suit the ideological and political biases of news outlets – and spy agencies seem to be beyond reproach. 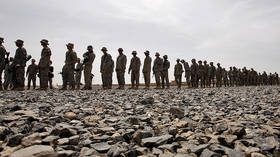 This, of course, is how America and Britain were drawn into the Iraq War. Mainstream media was complicit in manufacturing consent by publishing stories handed down by intelligence agencies – a great many of them later proven untrue. Perhaps most notably, the New York Times went big on the bogus “weapons of mass destruction” yarn.

After the damage was done, and hundreds of thousands of Iraqis had died, the paper apologized. It admitted it was encouraged to report the claims by “United States officials convinced of the need to intervene in Iraq.”

Almost two decades on, it has plainly learned nothing. This weekend the Times had three of its most senior journalists basically rewrite a CIA press release as part of its latest attempt to undermine President Donald Trump by playing the “Russia card.” Quite why it took so many of them is hard to understand – unless none wanted to be the sole name on the piece, preferring safety in numbers.

The story claimed that Russia is paying Afghan militants to kill American soldiers and that Trump’s team has known for months but done nothing. The US director of national intelligence quickly denied the allegations, as did the president himself. It surely wasn’t coincidental that the drop took place in the same weekend that reports emerged of Trump planning to withdraw 4,000 troops from Afghanistan.

If you know anything about Russia, the story is  obviously false. The Americans are totally bogged down in Kabul, which suits Moscow in myriad ways. In fact, the Kremlin would be only delighted if the US stayed there forever. What’s more, the Taliban hardly needs a financial incentive to attack a hated occupying force. So why would Moscow need to be handing out bounties to encourage people who already have it in for Americans?

Another interesting detail was the New York Times’ assertion that its allegations are “based at least in part on interrogations of captured Afghan militants and criminals.” Given we know the US uses torture in Afghanistan that should be an immediate red-flag to any self-respecting journalist. Not to mention the fact that even if Afghan prisoners did say this, it’s likely no more than prison gossip: “Daud told Nadir that Hashem heard the Russians will pay you for killing an American.”

The Times trio even threw in a bit of casual xenophobia. “I think we had forgotten how organically ruthless the Russians could be,” they quoted Peter Zwack, a retired military intelligence officer, as saying. Imagine a report saying Asians, Africans, Mexicans or Jews are “organically ruthless.” That’s right, you can’t, because it wouldn’t happen. But Russians, being predominantly white and Christian, are considered to be fair game.

Soon after, the Washington Post said it had ‘confirmed’ the Times’ story. All this means is they were fed the same bulls**t by the same anonymous spooks. Even more hilariously, the paper managed to get a named Taliban spokesman to go on the record with his denial, while it allowed the Americans who pushed the yarn to remain in the shadows. Nevertheless, which narrative do you think was given more credence?

This carry-on is deeply unethical. Especially given it comes just a couple of months after US/UK media went big on another fake story alleging Russia was trying to poison Czech politicians with ricin. Prague eventually admitted the tale was entirely made up. This confession, of course, received about one percent of the coverage granted to the original fabrication.

Predictably, broadcast media followed up on the Times and Post’s reports. Rachel Maddow was front and center, naturally. You’ll remember she spent a few years airing false and hysterical smears about Trump’s alleged ties to Moscow and suffered no professional consequences when the Mueller Report proved her allegations to be untrue.

But it wasn’t just Maddow. On Saturday, CNN ran “breaking news” saying it had found “a European intelligence official” to corroborate the tale. It then cut to its own correspondent, one Nick Paton Walsh. He provided no named source and his comments basically amounted to “some fella told me down the pub” stuff. Honestly, in any sane media culture, Paton Walsh would be laughed at, not encouraged.

For example, at one point he said “it’s not clear when this happened” and then added, “it’s clear it has caused casualties.” But instead of asking “how is it possible to know that if you can’t say when it happened?” the anchor just sat there nodding along with that vacuous look in her eyes which seems to be mandatory for CNN presenters.

Later, Britain’s Sky Newsran the same yarn, but said “British security officials have confirmed… that the reports about the plot are true.” Presumably, Sky was spoon-fed by the same spooks who exploited Paton Walsh as a ‘useful idiot’. Later, the Guardian’s Stephanie Kirchgaessner tweeted “this confirmation by closest intel allies is critical and damning: Russia paid Taliban fighters to attack British troops in Afghanistan.”

Again, the reporter expressed no doubts, because apparently the word of spooks is golden, and they would never lie.

It’s established that mainstream US/UK media operates in a self-contained pit of rumor, fear, braggadocio, bullshit, and propaganda when it comes to Russia. But what’s most bizarre is the sheer obviousness with which outlets circulate the same false stories and then use each other as corroborating sources even though they are all getting the information from the same people.

Folk who obviously have their own agendas, and are playing gormless hacks like a fiddle. The other incredible thing is a clear lack of understanding about what ‘confirmation’ even means. It obviously requires tangible evidence, on the record.

The New York Times’ coverage of Russia basically only has two tricks. They either rip-off articles from smaller Russian liberal outlets (who often can’t complain too loudly as they rely on Western funding) or they regurgitate anonymous sources in the US military-intelligence establishment looking to run scare stories about the country. None of this involves any reporting, and it cannot be considered journalism under any accepted definition of what the trade involves.

Really strong, detailed, piece from @BenjaminNorton on how @nytimes used Russian reporters work, without acknowledgement, in Pulitzer Prize-winning reportage: Twice now in three years. What makes it worse is these outlets have a pro-Western orientation. https://t.co/PcLB1uzloO.

Given the New York Times is arguably the biggest, and most visible, fish in the US/UK media world, you can only imagine the even lower standards that permeate further down the food chain.

Share. Twitter Facebook Google+ Pinterest LinkedIn Tumblr Email
Previous ArticleWarning that non-essential travel abroad should be avoided to prevent a Covid-19 surge in Ireland
Next Article From Wholesale To Retail: How Companies are Making The Switch