Prominent Belarusian opposition figure Maria Kolesnikova has been jailed in a Minsk pre-trial detention center after being accused of making public calls to seize power, according to her lawyer Lyudmila Kazak. 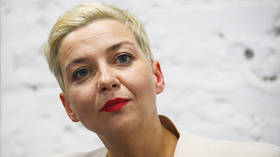 On Monday, it was reported that she had been kidnapped by unknown men on the city’s streets. Along with Svetlana Tikhanovskaya and Veronika Tsepkalo, Kolesnikova was one of the troika of women leading the opposition campaign against long-time Belarusian leader Alexander Lukashenko, and is the last of the three to have remained in the country.

Reports of Kolesnikova’s arrest broke early on Wednesday morning, when her father, Alexander Kolesnikov, told Belarusian news portal tut.by that he had been called by the country’s Investigative Committee with confirmation of her arrest.

Speaking to Russia’s TASS news agency, her lawyer Lyudmila Kazak explained that Kolesnikova is “in a fighting mood.”

While Kolesnikova’s camp maintains that the opposition figure has resisted deportation abroad, the country’s State Border Committee claims that she was arrested while illegally crossing into Ukraine.

Originally a campaign manager for presidential candidate Viktor Babariko, Kolesnikova became well known in July when Babariko was arrested. Kolesnikova picked up the mantle, aiding Tikhanovskaya who became the country’s most prominent opposition candidate. Following the election results, in which incumbent Lukashenko officially received 80 percent of the vote, Kolesnikova was elected to Tikhanovskaya’s Coordination Council, designed to facilitate a peaceful transition of power. The council has been accused by the Belarusian authorities of trying to usurp power.