In a surprise move, Russia may tighten visa rules for foreign workers. Former President Dmitry Medvedev says the measure is being considered in response to law and order issues exposed by the Covid-19 pandemic. 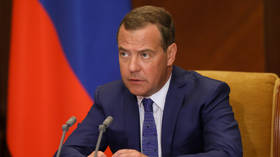 He told a meeting in Moscow that the possibility of moving to the system favored in Saudi Arabia, where the employer is fully responsible for labor migrants, is being discussed.

“[The expert community] proposes changing the order of entry for migrant workers to Russia,” Medvedev explained, the TASS news agency reported. “This means giving such permission to a foreign citizen only in the case of an unequivocal confirmation of his employment from an employer.”

Now Deputy Chairman of the Security Council, Medvedev added that research into how this might work in Russia is already being carried out by experts in the field. According to the specialists, it’s essential to take into account the experience of other states.

“In Arab countries … the employer assumes full responsibility for the actions of a foreign citizen they hire,” Medvedev elaborated. “This is a strict measure, but, nevertheless, it possibly needs to be discussed.”

According to the Interior Ministry, public order offences by foreign citizens working in Russia were recorded in in July in Moscow, St. Petersburg, Ekaterinburg and Murmansk and the Amur Region. “This, of course, is a reason for the leaders of these regions to think about implementing additional measures,” Medvedev said.

Many migrant workers in Russia lost their jobs during the pandemic lockdown and were unable to return home, due to the closure of almost all international transit routes.