The French government’s clumsy attempt to ban a new book with a deliberately provocative title has only ensured massive public interest and validation for men-haters. 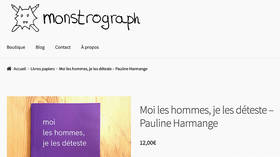 Oh, Monsieur Ralph Zurmély, what a mess you have made. This hapless minor official in France’s ministry for equality between men and women has fallen for the oldest trick in the book and made something out of nothing.

Seizing upon what was destined to be a little-read essay from a 25-year-old feminist activist and published by an obscure publishing house, he has inadvertently propelled Pauline Harmange’s deliberately and provocatively titled ‘Moi, Les Hommes, Je les Déteste’ – ‘I Hate Men’ – to the centre of public debate, which has seen three print runs sell out as it becomes the must-read book of the month.

The 80-page “ode to misandry,” the sort of work penned by sincere young things on their women’s studies degree courses, was spotted by M Zurmély during his humdrum workday and boy, did he set off some fireworks.

Blasting an email to the publishers at Monstrograph, the French bureaucrat warned: “I allow myself to remind you that incitement to hatred on the grounds of sex is a criminal offence! Consequently, I ask you to immediately remove this book from your catalog under penalty of criminal prosecution.”

There was no problem withdrawing the book from sale. After all three print runs had sold out and there are no copies to be found anywhere; at least not until the deal with a larger publisher is finalised and more copies are churned out in their thousands for a public desperate to find out what all the fuss is about.

That fuss is pretty much what any publisher would hope for by using a highly controversial book title to push some relatively pedestrian ideas from an earnest young French gender activist on the inside pages.

Harmange claims that now is the time for her book, though insists this is not bragging. She thinks that following the #MeToo and French #BalanceTonPorc – Denounce Your Pig – movements, the feminist cause is flagging and needs a misandry top-up.

She suggests that hating men “is not the end of the road. On the contrary, it is the very beginning, you emancipate yourself first by recognizing that you are pissed off (with men), and that you have good reason to be.”

She says that women hating men is, after all, quite natural “when you start to question sexist mechanics, and observe men with a feminist perspective. The place they take in conversations, in public space, their words and actions as a group, make misandry easy.”

It’s all pretty lame stuff and if submitted for assessment at university would seem run-of-the-mill. But M Zurmély has ensured that ‘I Hate Men’ has become something far more influential and controversial with Harmange as some sort of spokeswoman on how men take up too much space in women’s lives, are not innately decent human beings and have to learn to be so. Of course, if the whole concept was reversed and we were talking about a book called ‘I Hate Women’, I’d be writing this from a bunker.

Interestingly, one remark Harmange made to French GQ magazine is revelatory: “When you’re straight, you discover that you can be single and still have invaluable intrinsic worth. In fact, we are a whole person. Not a half that just waits to be filled with a penis to really exist.”

This says more about a very specific female point of view of relationships that are based on inequality rather than an equitable partnership. Surely, Harmange is not suggesting this is the universal case? Because, frankly, it’s not.

While the mouth-foamers argue the toss over government censorship in literature, the pros and cons of misandry and misogyny and the gender battle rages in the salons of Paris, the publishers of ‘I Hate Men’ will be rubbing their hands with glee.

But then, Monstrograph’s Martin Page (his co-publisher is Coline Pierré) does have form in this area. Earlier this year, Page published his own work, ‘Au-delà de la Pénétration’ – ‘Beyond Penetration’ – which explores sexual penetration “as a social construct that, more often than not, does not take into account female pleasure.”

In the launch publicity, Page was described as “a white heterosexual male who enjoys penetration.” In other words, a regular bloke. The book was something of a minor hit and was picked up by a larger publisher who deemed it worthy of a wider audience.

Quite how the ideas in ‘Beyond Penetration’ sit alongside the views of the autrice Hermange is not so clear because publisher Page is, to put it bluntly, all about the penis. Hermange on the other hand – so to speak – most definitely is not. That must lead to some incredibly awkward water-cooler moments in the offices of Monstrograph.

Or maybe this is all a cynical stunt by a tiny publishing house which has lucked on an over-zealous government official who unwittingly created a sensation out of nothing, giving the publisher a chance to flip a small work to a larger publisher, for a price, just like it did before.

As the feminist flames rage, stoked by ‘I Hate Men’ and its cheerleaders – many of whom will never read the book – and men who refuse to counter this divisive nonsense, then those pre-orders will keep mounting up online ready for the big ‘ker-ching’ with the next edition.

Merci Monsieur Zurmély, your work here is done. We have it from here.