Britain is in the grip of a revolution. Much to the relief of the country’s ruling elite, it is a cultural revolution, and not an economic or political one. 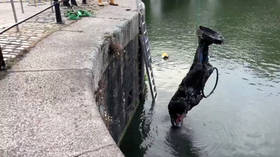 Facing an economic recession of historic dimensions and presiding over some of the grimmest Covid-19 statistics on the planet, Britain is convulsed over whether the peccadilloes of Boy Scouts founder Robert Baden-Powell were sufficiently ugly to justify his likeness taking a dip in Poole Harbour, like the slave trader Edward Colston did in Bristol Harbour.

Of course the hypocrites bewailing Colston suffering the same fate as tens of thousands of his victims tossed overboard – usually, but not always, dead – from his slave ships as “undemocratic” miss the point that hardly anybody in England even had the vote when the statue was erected.

READ MORE: Destroy EVERYTHING! Will culture police keen to purge historical racism turn to museums, galleries and libraries next?

And Baden-Powell’s chief offence, cosying up to Adolf Hitler, was the norm rather than the exception amongst the ruling caste in the 1930s. His attitude to imperialist wars in Africa was par for the course in Britain in his era, too.

Cecil Rhodes, who still towers over Oxford University, is certainly an egregious example of racist venality. He wasn’t just a brutal racist and imperialist; he systemised racism, paving the way to apartheid – nowhere more so than in the country which for a time bore his very name: Rhodesia.

But if anything sums up the triumph of identity politics over class politics, it is the extraordinary verve with which millions of people around the world have poured their courage and energy into the Black Lives Matter protests, while Britain CONTINUES to be up to its neck in imperialist crimes which are largely unprotested.

Lives don’t seem to matter in Yemen, for example, where plague and famine of biblical proportions are exacerbated by British- and American- enabled attacks which have killed hundreds of thousands of people. Not in centuries gone by, but now.

Arab lives in Syria haven’t mattered to more than a handful of people in Britain throughout nearly a decade of explicit military, political, financial and propaganda support to fanatic hordes seeking to destroy the secular Arab Republic.

When black people hung like strange fruit from Libyan trees following the UK/US/French invasion of the country and the sodomising with a bayonet of its leader, liberals like Hillary Clinton and David Cameron laughed – literally, in Clinton’s case.

In Britain, where around 60,000 excess deaths were reported by the Office of National Statistics and the Financial Times over just a few months in 2020, a hugely disproportionate number of those deaths were suffered by BAME citizens. Those black lives don’t seem to have mattered much. Not enough to protest about, at least.

Were disgust – entirely justified – at the crimes of British imperialism in previous centuries translated into a determination to end the default British position of interfering in every part of the world – up to and including actual invasion – that would be a good thing of course, however unlikely.

Unlikely because the British crimes of the past didn’t happen because the criminals were British. They didn’t happen because the criminals were, psychologically speaking, sociopathic and often possibly psychopathic individuals – although many of them were, judging by their actions. Captain Cook didn’t slice off the limbs of recalcitrant natives in the antipodes because he loved the sight of blood (though he might well have) but because he was about the business of conquest and empire. And empire is about the business of business. Britain conquered much of the world not to hand out bibles but to loot everything they could carry – including, in the form of slavery, the very people of the invaded lands themselves.

Imperialism is ineluctably a development of our capitalist model, the need for captive markets and cheap (preferably free) sources of labour, basic commodities and raw materials.

It was not the British working class who benefitted from the British Empire – not the wage-slaves of the slavers. The colonised peoples and the slaves all had the same enemy, which fed on the blood, sweat and tears of us all. The enemy is at home. Not in the 17th century, but now. 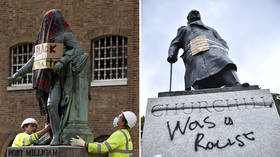 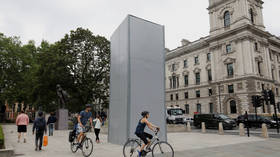