A spokesman for the German government said on Monday that Berlin believes there’s a ‘certain probability’ that Russian anti-corruption campaigner Alexey Navalny was poisoned and that he requires personal protection. 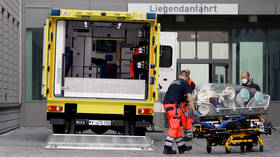 “We are dealing with a patient where there is a certain probability that he was poisoned,” Steffan Seibert told a press conference on Monday morning. On this basis, Berlin is convinced that Navalny needs to be protected, he explained.

However, Foreign Minister Heiko Maas sounded a note of caution, warning that it’s necessary to wait for a statement by the doctors treating him before making judgements. Maas added that many facts relevant to the case are still missing.

“I am one of those people who bases my views on facts,” Mass said during a news conference. “Many facts are missing in the case of Navalny: medical and also likely criminological. We must wait for those (facts).”

Navalny became ill during a flight from Tomsk to Moscow last Thursday. His plane made an emergency landing, and the protest leader was taken to a hospital in Omsk in a serious condition. He was placed in an induced coma and connected to a ventilator.

His associates believe that he was poisoned, but Russian doctors claim that two different laboratories found no poisons in his system. German doctors are expected to talk about his condition later on Monday. He was airlifted to Berlin on Saturday.