Brazil, which has suffered the world’s second highest Covid-19 death toll, is planning to receive up to 50 million doses of the Russian made Sputnik V, the planet’s first registered coronavirus vaccine. 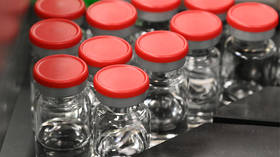 “Deliveries are expected to start in November,” according to the Russian Direct Investment Fund (RDIF), which bankrolled the formula’s development. The matter is still awaiting final approval by Brazilian regulators.

As of now, the multimillion doseagreement involves only a single Brazilian state, Bahia, but it is expected it be eventually be rolled out at national level.

After some Western criticism, the Russian agency stressed that Sputnik V was approved largely due to its proven foundation. It has been developed using human adenoviral vectors, a long-trusted vaccine platform. The reliability of this method has been proven via extensive research.

Previously, the RDIF announced that it expects the Latin America region to receive up to 100 million doses of the Russia-made formula.

The Sputnik V vaccine was created by Moscow’s Gamaleya center in conjunction with the Russian Defense Ministry. On August 11, President Vladimir Putin declared that the country had registered the world’s first Covid-19 vaccine.

It is scheduled to be available to the general public around New Year, and is currently in its third trial stage, during which 40,000 volunteers will receive two shots of the solution. Since the launch of Sputnik V, Russia has received requests for around a billion doses, according to the RDIF.

Brazil, the largest country in South America, has become one of the world’s Covid-19 epicenters. It has recorded 4,251,455 cases of the disease and officially recorded 129,865 deaths.