On the eve of his 35th birthday, a look at the influence being exerted by Rob Kearney in Perth. 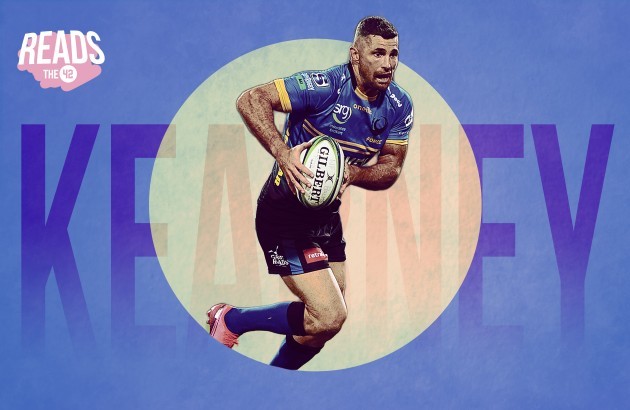 SO, THREE MONTHS since he swapped Ireland for Australia, how has Rob Kearney been acclimatising to his new surroundings?

“Well,” laughs Western Force captain Ian Prior, “he lives in a penthouse across the road from the beach, so I’d say he has settled in pretty damn well.”

That his colleagues are so amenable to providing an insight into his time so far at Western Force speaks volumes about the impression that Kearney has already made.

“Thanks for giving me a chance to speak about one of the legends of the game,” Prior tells The42 from Brisbane, where the Force based themselves before travelling to Canberra for tomorrow morning’s fixture against the Brumbies.

Although an injury will restrict him to a spectator’s role for the return meeting with the champions, Kearney has started in all four of his side’s Super Rugby AU games to date.

His absence will be keenly felt by the Force, who’ll be buoyed by last weekend’s display in a narrow defeat to the unbeaten Queensland Reds as they bid for a second win of the campaign.

Tomorrow’s game coincides with Kearney’s 35th birthday, yet Ireland’s most decorated player continues to excel in top-level rugby nearly 16 years since his first competitive outing as a professional.

As his new team-mates and coaches so readily attest, the oldest back ever to debut in Super Rugby has wasted no time in demonstrating that he still has plenty to offer.

Mr Reliable @KearneyRob on debut with the Force.

Catch all of the action, become a Member today ➡️ https://t.co/bSxeuj4Vn4#ForceForever #GameOn pic.twitter.com/GnmditCLY0

“I had a good sit-down with Rob last week and we had a chat about certain things,” says Western Force head coach Tim Sampson. “One thing he commented on was that he has actually surprised himself with how his body has adapted over here.

“In the early days he’d say that he’d never seen training sessions like that in terms of the volume that he and the rest of the squad had to cover. We were in our pre-season phase at that stage obviously but we had some pretty big sessions.

“It surprised him how we train over here and also how able he was to get used to that. I think he’s headstrong, he’s very happy with where his body is at and he’s travelling nicely.”

Prior adds: “The grey hair is a bit of a giveaway – which I always remind him of, so he keeps the sides of his hair short to mask it – but other than that you really wouldn’t think that he is [going on 35].

“He talks about how much faster Super Rugby is and how demanding it is on the lungs. There probably aren’t the bigger bodies like the northern hemisphere, but with the conditions here it’s faster with a lot more running. He can’t believe how fast we train but he’s still well able for it. At that age, being able to put his mark on the game the way he does is incredible.”

By the time Kearney got his first taste of Super Rugby, it had been six months since his most recent competitive fixture: a Guinness Pro14 win for Leinster against Ulster at the Aviva Stadium.

Nevertheless, his performance in the 11-27 loss against the Brumbies at the Perth Oval drew a considerable level of praise from within the game in Australia.

“Quite simply – class,” is the description of Kearney from Nick Taylor, rugby reporter with The West Australian newspaper. “He has shown in four games that he is still a quality player and a quality person off-field when he fronts up to all the media pressers, publicity engagements and so on.” 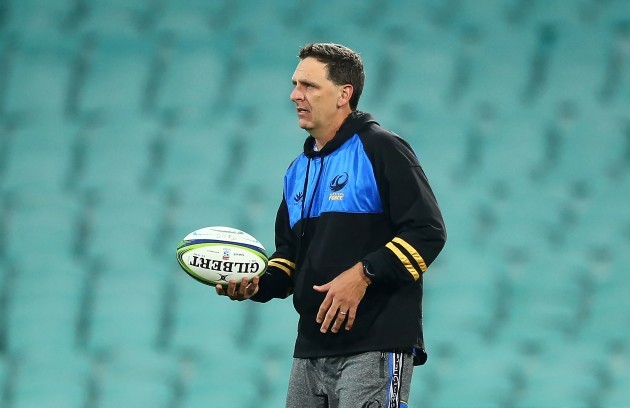 Sampson says: “Rob has brought a very knowledgeable mind on the game. Being able to play a different style of rugby has probably assisted us in a couple of areas as well – for example, our backfield defence on the back-end of kicking strategies. Picking his mind on different ways to do things has really helped us.”

Prior adds: “He’s a consummate professional with a real winner’s mentality. He’s been at the top of the game for many years, but he came over here at 34 in incredible condition and he’s been looking to compete from day one. He’s just been outstanding in every aspect.”

That his greatest days are in the past is a matter not open to debate. However, with the signing of the distinguished fullback, Western Force have strengthened for the present, while simultaneously – and perhaps even more significantly – investing in their future.

“I was surprised at the time that we were able to get someone of Rob’s calibre,” says Prior. “It’s huge, and it has a huge effect on the players and the squad.

“If you look at someone like Jack McGregor, a young Aussie player who’s dripping with talent, he now gets to learn from one of the best – if not the best – fullbacks in the game. To bring in a quality signing like that just shows where this organisation is heading.”

Having been controversially axed from Super Rugby in 2017, Western Force accepted an invitation to return last May for the new domestic competition that was established as a consequence of the Covid-19 pandemic.

Billionaire owner Andrew ‘Twiggy’ Forrest, one of the wealthiest individuals in Australia, intends to provide the team with the infrastructure it requires to bring success to Perth. 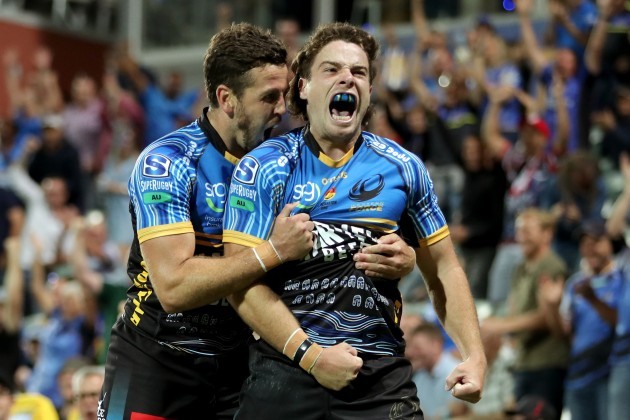 Ian Prior congratulates Jack McGregor after his try in a recent game against Melbourne Rebels.

“Some of our back-three players are very good players in their own right but they’re still quite young, so having Rob there adds a bit of security and he’s been fantastic for them,” says Sampson.

“They’ve been great for him too by asking him a lot of questions around certain things. Being the type of bloke he is, Rob is more than happy to help out our younger guys and provide them with the advice they need. He’s been exceptional in that regard.”

And, as Prior outlines, it isn’t just the Force’s prospective stars of the future who are benefitting from working alongside Kearney.

“For guys like myself in that 28-to-32 age bracket, it shows that if you look after yourself, you’re passionate about what you do and you’re out there to win, anything is possible,” says the 30-year-old scrum-half.

“Rob has certainly given me a lot of inspiration in thinking that I can keep going if I apply myself like he has done.”

The recruitment of Kearney has also provided Western Force with a useful tool to strengthen its connection with the sizeable Irish contingent in the area.

Karen Hennessy is a teacher for whom Perth has been home for the last 12 years. A native of Malahide, she’s an ardent Western Force supporter and was one of the organisers of the ‘Save The Force’ rally following the team’s removal from Super Rugby.

“The Western Force traditionally have a large ex-pat supporter base, which includes many Irish,” she says. “There is a Perth Irish Rugby Club and Rob has attended training sessions, shared training times on his social media and been gracious with his time in helping the U16s with one-on-one skills sessions, as well as the senior side who are in pre-season training.

Ha class to see so many paddies after the game – Thanks for coming and cheering on the boys 🍀 https://t.co/FHTwzLTBQm

“It’s fantastic to have our very own Rob Kearney taking to the field and seeing the impression that has on the kids. It’s the kind of thing that really keeps the connection with home alive.

“The overall assessment of Rob among supporters – Irish and Aussies alike – is that it’s great to see such a world-class player leading the team from the back. There is genuine recognition and respect for his achievements down here in the southern hemisphere.”

Kearney is one of more than a dozen internationals in the Western Force squad. Among his team-mates are a pair of All Blacks – Jeremy Thrush and Richard Kahui – as well as a cohort of Wallabies that includes Tevita Kuridrani and Tom Robertson. Nevertheless, the Irishman was a significant addition to their ranks for 2021.

“His name is known worldwide so it attracted plenty of media interest at the time,” Taylor says. “It is still a relatively young squad so you can see why someone like Rob Kearney was extremely important to the Force.

“His experience, knowledge, wisdom, ability to read games, to teach the young players – and there are a number of them as the Force kickstarts its own pathways again – is invaluable.”

When the Super Rugby AU campaign concludes, the Australian teams will again compete with their neighbours from New Zealand in the Super Rugby Trans-Tasman competition. It begins for Western Force at home to the Chiefs on 15 May.

The contract that Kearney signed isn’t due to run beyond 2021, but the prolonging of his association with the Force is a possibility that isn’t being dismissed.

“We’ve only had four games and it’s been important to give Rob a soft landing, just so he can set things up nicely for himself at the club and also within the competition,” says Sampson. 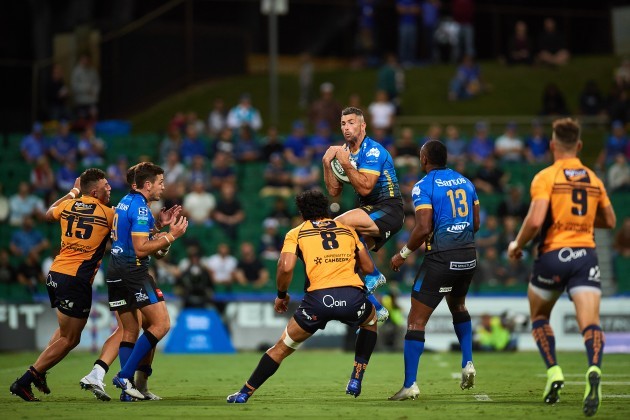 “He’s a wonderful member of our squad and the club, and a great ambassador for the game here in Perth. I’m sure a conversation will be had, probably over the next month or so as we draw towards the end of Super Rugby AU and then transition to Super Rugby Trans-Tasman. He’s certainly an asset for the club and someone we’d love to keep around.”

Should Kearney opt to pursue a career in coaching once his playing days conclude, Sampson believes he possesses the attributes required to prosper.

“Importantly,” he says, “if Rob is keen for it, the game can’t lose guys like that. He has so much upstairs in his mind, with all the experiences and success that he’s had.

“For him to tap into that and pass it on to players at any level – from junior rugby through to the professional game – would be fantastic. He’s got a great demeanour about him too, very personable, hugely popular, so he’d have a lot of respect as well, no doubt.”

The authentic passion that Kearney still exudes – as captured when he was mic’d up by broadcaster Stan Sport during his Western Force debut – has already dispelled any doubts over the purpose of his move to Perth. A mercenary whose only objective is to eke out a few more decent paycheques is a description that doesn’t apply here.

“He’s a real competitor, which has been in evidence since he came here,” Prior insists. “Whether it’s a game of cards, ping-pong or golf, he wants to win. That’s probably a large part of why he’s had such an illustrious career.

“It’s very obvious that he hasn’t come here to make up the numbers. He’s made his voice heard and his presence known, and he’s helping to bring the young guys along to try and build this club into something special.”

For more great storytelling and analysis from our award-winning journalists, join the club at The42 Membership today. Click here to find out more >