If the foreign minister doesn’t have a clue, it’s probably time to give up guessing. On Monday, Sergey Lavrov admitted to RT that he has no knowledge of when his country’s borders, shut since March, will reopen. 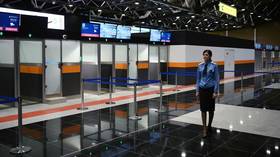 “I don’t know. We are gradually starting to return to normal life, leaving (behind) the period of video conferences,” he said. “I was already visited – in person – by two of my colleagues: Mohammad Javad Zarif, the minister of foreign affairs from Iran, and by Jorge Arreasa, from Venezuela.”

Despite receiving diplomatic guests, Lavrov believes it might be some time before the borders open up for ordinary Russians.

“The European Union is now opening up, but, given the number of detected cases of infection in Russia, like in the USA and in Brazil, the EU is not yet considering opening up [for Russians],” he said.

The bloc is planning to reopen to a large number of non-EU citizens on July 1. However, people from countries with a large number of infections won’t immediately be allowed in – including those from Russia and the USA.

Foreign Minister Lavrov also revealed that at least 20,000 Russians who have expressed a desire to return still remain abroad. Despite regular repatriation flights, some areas of the world are inaccessible to Russian airlines – including Oceania and the Philippines.

On March 27, Russia halted all international passenger air travel to and from the country, with only specially permitted flights being allowed to transport people across the border.