A platoon commander in a Russian army tank division has enlisted the help of sixteen T-72B3 tanks to pop a question to his sweetheart after the machines lined up in a heart-shaped formation. She said “yes,” of course. 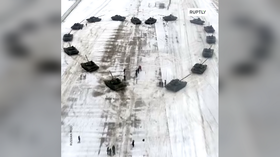 They say love is made in heaven, but what about a tank proving grounds? In case of Lieutenant Denis Kazantsev of the 2nd Guards Motor Rifle Division “Tamanskaya” and his girlfriend Alexandra Kopytova, that was certainly the case.

Though Valentine’s Day is not a tradition in Russia, the spirit of love was not lost on Denis’s commanders, who gave a go-ahead for the mission never attempted before at the Alabino testing grounds, southwest of Moscow. On Thursday morning, 16 tanks rolled onto the range for a novel maneuvering drill that would see them forming up two columns and then aligning into a formation resembling a heart.

The mission’s success, however, hinged on the approval of only one person – neither a major nor a general. With her eyes covered, the 19-year-old Alexandra was led into the heart of the formation by Denis, 23. As she opened her eyes, she saw a kneeling Kazantsev with a bouquet of red roses and a romantic proposal.

“We have been together for a long time. We have endured time and distances. Will you marry me?”

As the unusual ceremony grabbed headlines in Russian media, it turned out there was more to the story. Denis and Alexandra have been married for more than a year already, but half of that time they were living thousands of kilometers apart, as Alexandra needed to finish her studies in the eastern Siberian region of Buryatia.

Denis proposed to Alexandra on New Years’ Eve back in 2017, when the school sweethearts were living in different cities. It wasn’t until late 2018 that Alexandra flew in to St. Petersburg for a wedding ceremony. They only had two weeks of marital bliss, however, before she had to head back to Siberia.

Speaking to Metro News, Alexandra said that she was not aware of Denis’s plan when he invited her to Alabino, but was captivated by the spectacle.

I have never thought that it could be that beautiful! I have not expected that!…I’m very happy!