A US cop justifiably shoots a threatening black man dead, but still the ‘woke’ brigade blame the police and BLM activists take to the streets. If this continues, officers will give up and then we’ll be in big trouble. 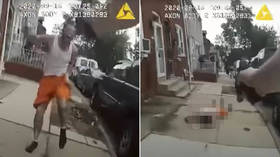 Yet again we are confronted with Black Lives Matter supporters rioting, this time in Lancaster, Pennsylvania, because a lone police officer has shot a black man dead. Have you seen the video of the incident? I have. It shows a woman running screaming from a house followed by Ricardo Munoz, a black man, holding a large knife in his hand.

The officer’s body camera records in barely two or three seconds Munoz charging at him, as the cop tries to back away rapidly, but Munoz is faster, and so the officer shoots him. In my judgement as a 30-year police veteran who’s seen and dealt with a lot of violence, the officer had no choice. A second or two later, he’d have had the knife plunged into his neck. In his position, I would have shot Munoz myself.

But, once again, the video is being played out as feeding the narrative of how hard-done-by young black males are at the hands of the police in America. As if it’s another George Floyd case.

The ‘woke’ media is feeding this narrative, while pusillanimous and vacillating police chiefs apologise or suspend police officers based on a few seconds of video circulating on social media, with no reference to what may have caused the officer to get out his car and become involved in a confrontation with another young black person exuding aggression, anger and violence. Surely the officer – along with many of his colleagues – must by now be thinking they would all be better off ignoring such emergency calls for help, and instead enjoy a quiet, peaceful coffee and a few donuts?

Who on earth would want to be in a job where you get assaulted, surrounded, called a racist and even get suspended, or worse, for just trying to protect people? We should not be surprised that stabbings of black males are rising all the time. Maybe some readers do not care.

But you would be wise to think about this phenomenon of BLM and rushing to judgement on the motives of our police officers, because many of them are giving up. No good can come of all this; unless, perhaps, you sell donuts.

I want our police to do their job, prevent crime and catch criminals without fear or favour. If that means they need to stop and search a lot of young black males to reduce street violence or drug-dealing so be it. Their mothers will be grateful.

The entire community, Black, Asian, White, Christian, Muslim or Agnostic, needs to get behind our police now, support them and help them if they can. That is unless you are happy to see a large man on your bus waving a machete about at 7am in the morning.

Last week here in the UK, we were treated to the sight of hundreds of BLM demonstrators shouting and chanting outside New Scotland Yard police HQ in London’s Westminster. They did so with a reckless and selfish disregard for the need to socially distance, avoid large gatherings and stop spraying sputum potentially loaded with Covid into the air.

One might have thought that since black people are apparently suffering disproportionately more deaths because of Covid they might be more sensible and responsible to stay indoors and not risk spreading the virus. Or perhaps, no matter how ludicrous, take their complaint about the virus’s “discrimination” across the river to St Thomas’s Hospital. Why not? With their “poor me” victim mentality, why not blame the NHS instead?

What were they screaming about? Apparently, every time a young black male steps out of their front door in the UK they are subject to abuse, maltreatment and even death at the hands of the police.

For the record, the Independent Office of Police Conduct (IOPC) has reported that 16 people died in police custody last year, mainly from drug overdoses they’d given themselves. Of these, only one was black. When it comes to police use of firearms, three people were shot dead last year by police; again, only one was black. That is hardly an epidemic of police killing black males.

The demonstrators had nothing to say about the nearly one hundred black people, most of whom were young males, who were murdered last year in the UK. Nor did they say anything about the epidemic of young black males being shot or stabbed, often several cases a day in London and our big cities. Could this be because in most of these incidents, the murderers and attackers are also young black males?

When are we going to confront this fact and take the action needed to stem the loss of black blood? Or reduce the disproportionate numbers of young black males serving long prison sentences for causing this blood to flow?

You do not get a long prison sentence for fraud; you get it for murder, extremely violent attacks, rapes or the drug-dealing of heroin, crack or cocaine, etc.

When are we as society going to stop making excuses and do something to stop so many black mothers losing their sons to the undertaker or the prison system?

Sadly, we will not face this issue. Instead, we expect our police and other linked organisations to go out there and deal with this problem, if they do it nicely.

Well I have got news for the ‘woke’ and naïve. You cannot deal with a strong, fit, aggressive violent young male by being gentle. If you try, you will get badly hurt. In all my years in policing, I learnt that if someone is not open to reason, or is drunk, on drugs and/or has a weapon like a knife, if you don’t go in hard and fast you get hurt. That includes, if necessary, hitting them with your baton on any part of their body you can connect with, kicking, punching, choking or even forcing their head onto the floor. The few times I did not adopt this tactic, I got badly hurt.

None of this looks ‘nice’ and it isn’t pleasant, but if it is your job to protect the public, including young black males stabbing each other, it has to be done, unless we want our police officers to ignore violent bullies and thugs and walk away. Street fighting is not a boxing match with rules and a referee. It is nasty, shocking, frightening, and leaves the officers involved shaken and stressed, if they are lucky, or cut or worse, if they are not. Not forgetting that they then have to go off sick and are not there to protect us the next day.

As the author George Orwell reportedly said, “People sleep peacefully in their beds at night only because rough men stand ready to do violence on their behalf.”

Our policewomen and men of all races are not particularly rough or violent, they are decent, well educated and thoughtful people who care. They would prefer to talk their way through a problem or use persuasion. Sometimes, however, they have no choice but to be “rough.”

When they are, they need to know that they will be treated fairly and not subjected to a howling media, the BLM mob or to spineless decision-making by their bosses or the police conduct office hunting their scalps.

If things don’t change, the only advice I can offer you is to buy some shares in a donut shop, because, if I was still a police officer with a family to support and a mortgage, that’s where you’d likely find me. 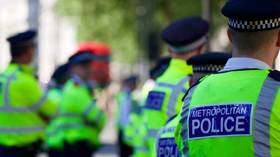