A world-class field of 88 golfers made final preparations on the eve of the 85th Masters.

AUGUSTA NATIONAL DIDN’T create firm and fast conditions for this week’s Masters because top-ranked Dustin Johnson went 20-under par to shatter the course record last year on a rain-softened layout.

“We have the golf course where we want it. It’s playing firm and fast,” Ridley said. “Our goal is to maintain it for the week.”

A world-class field of 88 golfers made final preparations on Wednesday on the eve of the 85th Masters, the lightning-quick course a very different test from last November’s Covid-delayed event dominated by Johnson.

“That really had nothing to do with the way the golf course is playing right now,” Ridley said.

“The course is in the best condition that I’ve ever seen it in the 20 years I’ve been a member.”

“There’s nobody more qualified within the club to know, understand and set the course up better than chairman Ridley,” Mickelson said. 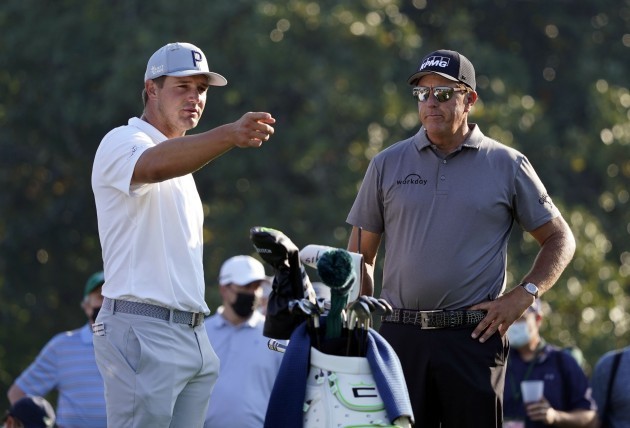 Bryson DeChambeau (left) and Phil Mickelson (right) on the 10th tee during a practice round.

Johnson will try to become the first repeat winner since Tiger Woods in 2002 while Rory McIlroy seeks a win to complete a career Grand Slam.

Players worked on putts, chips and driving and had final practice rounds before the chase for the green jacket begins.

“The faster greens have a little more pace to them,” 2003 Masters champion Mike Weir of Canada said. “You really have to think. Those landing areas shrink down when the greens get firmer like this and the precision shotmaking is heightened.”

Such shots will elicit roars from a limited number of spectators allowed under Covid-19 safety protocols after last year’s Masters was played without fans due to the virus.

“Bad shots are punished a little more and the good shots are rewarded because the areas on the green are so small,” Australian Marc Leishman said.

“The more you know the course, the bigger advantage it is. When it’s like this, there are places that you have to put a big red X in your yardage book and make sure you don’t hit it there.”

Lee Elder, the first Black golfer to play in the Masters, this year will join Jack Nicklaus and Gary Player as honorary starters, hitting the ceremonial tee shots to begin the tournament on Thursday morning.

There is a chance of thundershowers on Friday that could soften course conditions, one likely reason the course has been firm and fast so far this week.

“If the rain doesn’t come, then it will be really fun,” sixth-ranked Xander Schauffele said. “It has the potential to be even crazier.”

“The little kid in you comes out here,” said 2012 US Open winner Webb Simpson. “The guy who doesn’t make many mistakes is going to do pretty well come Sunday.”

Mickelson says iron shots and setting up proper position for approaches will be the key to solving Augusta’s formidable greens.

“You don’t have to play perfect but you have to be smart and you have to have great touch around the greens,” Mickelson said.

“It’s going to be a strategic, difficult challenge that forces you to think about angles. It comes down to the one defense of this course, which is the greens.”

Five-time Masters winner Woods is absent due to serious leg injuries suffered in a February one-car crash in California that authorities said Wednesday was caused by excessive speed.

“I was deeply saddened when I learned of Tiger’s tragic car accident,” Ridley said. “Tiger Woods is one of the greatest competitors in the history of all sports.

“He’s greatly missed this week and we continue to hope and pray for his recovery.”