Russia’s health watchdog will require hotels across the country to let authorities know if unmarried adults are sleeping together, according to a report in the government newspaper Rossiyskaya Gazeta. 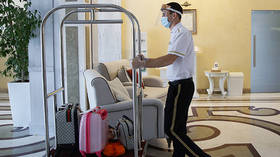 Despite how it may seem, Rospotrebnadzor’s latest measure isn’t fueled by religious puritanism. Nor is it inspired by Beyonce’s advice to single ladies sifting through potential suitors that “if you like it, then you shoulda put a ring on it.” Instead, it’s designed to stem the spread of Covid-19 as Russia begins to reopen.

Social media users have lampooned the new guidelines, with some saying it’s a reminder of the moral standards of the Soviet era, when cohabitation was discouraged outside of wedlock. One Twitter account wondered if “next we will have Rospotrebnadzor raids on apartments at any time of the day requiring legal grounds to sleep with someone.”

“The burden of proving marital status is entirely the responsibility of the hotel,” the newspaper says. But the Russian Hotel Association has noted that hotels do not have the right to check the family status of guests, according to its president Gennady Lamshin. He added that hotels will not ask for documents and will determine themselves how to check in the guests. Lamshin also said that the wording of the instruction allowed hotels to class couples in long-term relationships the same way as those who are formally married.

Rospotrebnadzor’s press office explained that it wasn’t trying to bring back Komsomol-style public censure of sex before marriage, but rather asking hotels to help with preventing further coronavirus outbreaks. “The recommendation is not to place people who are not in close contact with each other, in daily life, in one room,” it told Moscow daily RBK, adding: “Family members do not need to prove anything.”

Other new rules require hotels to measure the temperature of guests at check-in and then daily during their stay. The public health agency also recommends all employees be masked and that they limit their contact with guests by installing partitions.