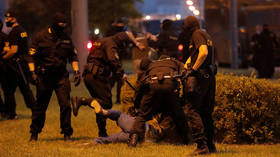 While reporting on Sunday’s hotly contested Belarusian presidential election – in which incumbent Alexander Lukashenko officially won 80 percent of the vote – several Russian media personnel were detained. Among them were multiple journalists from TV Rain, Maxim Solopov from Riga-based Meduza, and Semyon Pegov, a Russian war correspondent and founder of the WarGonzo project. Earlier, reporters from the US state-run RFE/RL were arrested and deported from the country.

Not the best advertisement for ‘Belarus sightseeing.’Two Russian journalists, Vladimir Romensky & Vasily Polonsky, and their cameraman, Nikolai Antipov, being arrested in Minsk, after they interviewed the main opposition candidate in today’s presidential election. pic.twitter.com/qYqW5lk6Li

On her personal Facebook page, Zakharova noted that Monday is her fifth anniversary of working as press secretary for the Russian Foreign Ministry.

“I didn’t think that, on this day, I would be protecting Russian journalists from the disproportionate actions of security forces in brotherly Belarus,” she wrote.

Zakharova acknowledged that Belarusian laws require journalists to obtain permission to work in state, but explained that the lack of an official pass is no reason to use physical force, calling the response “disproportionate.”

“Many of them, in good faith, requested accreditation in advance and followed all the rules. They were not given it, and then they were hit on the head with truncheons,” she wrote. “This is definitely not brotherly behavior.”

Following the announcement of Belarus’ election exit polls, which stated that 80 percent of voters re-elected incumbent President Lukashenko, mass protests were held long into the night. The results are widely considered to be falsified, with some suggesting that opposition candidate Svetlana Tikhanovskaya herself may have a majority.

In Minsk, there were violent clashes between demonstrators and the police, with the country’s security forces using stun grades and water cannons to disperse demonstrators. Over 3,000 people were arrested, and at least one protester was killed.