With 100 days to go before the November election, the US intelligence community issued warnings about foreign ‘influence measures’ such as media reports. The actual challenge to US democracy, however, comes from within. 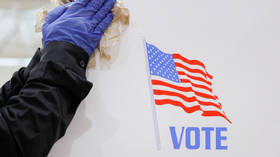 Foreign countries “continue to use influence measures in social and traditional media in an effort to sway US voters’ preferences and perspectives, to shift US policies, to increase discord and to undermine confidence in our democratic process,” said a statement from the Office of the Director of National Intelligence (ODNI) on Friday.

China is seeking to “pressure political figures it views as opposed to China’s interests” which “might affect” the presidential race, says ODNI. Iran is trying to divide Americans by “spreading disinformation on social media and recirculating anti-US content.” And Russia “continues to spread disinformation in the US that is designed to undermine confidence in our democratic process” and “denigrate what it sees as an anti-Russia” establishment.

This Sunday marks 100 days until the #2020Election. As Americans, we all have a role in protecting our elections from foreign influence. Our elections should always be our own. #Protect2020pic.twitter.com/apzD8xxNSR

When you parse the political language of this, it boils down to all three countries offering news and opinions in the US media space that disagree with the mainstream US media coverage. How dare they!

Who could forget the Chinese propaganda campaign to reimagine American history as one of irredeemable racism, starting not in 1776 with the Declaration of Independence but long before that, with the arrival of first slaves from Africa? Oh wait, no, it’s the New York Times’s Pulitzer Prize-winning ‘1619 Project’ that did that.

What about the Iranian disinformation that President Donald Trump’s Independence Day speech was “dark and divisive”? Except that was the Times again – and the Washington Post, and CNN, and MSNBC, and other “foreign agents” all the way down.

🧵THREAD🧵In honor of our nation’s Independence Day, I’ve put together side-by-sides of the media’s coverage of @realDonaldTrump’s speech vs. the text they purport to describe. pic.twitter.com/FTVSdsW3N4

Well, then, how about the Russian effort to declare Mt. Rushmore a monument to racism and the 4th of July event there a celebration of white supremacy? Erm, hold on, that was the… Democratic Party. Oops.

Also, how dare Russia think there is an “anti-Russian establishment” in the US? No one here would uncritically believe the New York Times story about Moscow offering “bounties” to the Taliban to kill US troops in Afghanistan… would they?

The irony here is that ODNI’s job of warning Americans about “foreign threats” was created in the first place by a domestic actor falsely claiming “Russian meddling” to justify the unanticipated defeat in 2016. Time and again, Hillary Clinton’s assertions of President Donald Trump’s “collusion” with Russia have been debunked with actual evidence. In the real world, the FBI and the Justice Department used dodgy British and Ukrainian rumors as grounds for spying on Trump’s campaign and launching sham prosecutions of his aides, like General Michael Flynn.

Indeed, the fact the FBI could no longer be trusted with counter-intelligence briefings of campaigns was the reason the job was recently entrusted to the National Counterintelligence and Security Center (NCSC) Director William Evanina at the ODNI, who signed Friday’s statement.

For continuing to carry water for the “foreign meddling” narrative, Evanina was rewarded with criticism from the Democrats, who complained he did “not go nearly far enough in arming the American people with the knowledge they need about how foreign powers are seeking to influence our political process.”

This statement of disapproval was signed by House Speaker Nancy “All roads lead to Putin” Pelosi; Senate Minority Leader Chuck “Spies have six ways from Sunday at getting back at you” Schumer; Rep. Adam “I have evidence of Russia collusion!” Schiff; and Senator Mark “Steele dossier pusher” Warner. In other words, the very crowd that’s got the US into this very mess to begin with.