The UK Prime Minister warned that there is a danger of a fresh wave of Covid-19 spreading from Europe.

BORIS JOHNSON HAS appealed to the public to exercise caution as coronavirus lockdown restrictions in England are eased amid fears of a new wave of the disease spreading from Europe.

At a Downing Street press conference the UK Prime Minister acknowledged it had been a “big day” for many people as they were able to see friends and family outdoors for the first time since the latest controls were imposed.

However, he said it was still not clear how “robust” the defences provided by the vaccination programme would prove if the rise in infections on the continent was repeated in the UK.

“What we don’t know is exactly how strong our fortifications now are, how robust our defences are against another wave,” he said.

We have seen what is happening with our European friends. Historically, at least there has been a time lag and then we have had a wave ourselves.

“That’s why I stress the importance of everybody maintaining the discipline people have shown for so long.”

His warning was echoed by the chief medical officer from England, Professor Chris Whitty, who said there was a “high likelihood” cases would rise as lockdown restrictions were steadily lifted according to the timetable set out in the government’s road map.

He said that while most of those at the greatest risk of death or serious illness, had now received the vaccine, the disease spread most rapidly among younger age groups who had yet to receive the jab. 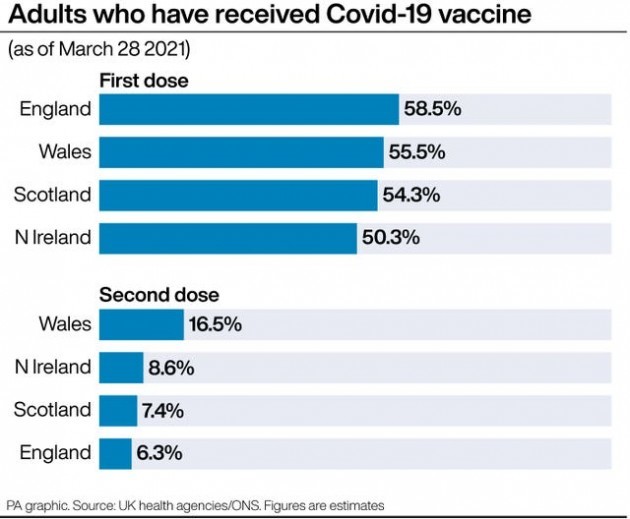 There were already signs of an increase in infections among children of school-age following the reopening of schools in England earlier this month.

However, Prof Whitty said the impact should be “modest” if people continue to follow social-distancing guidelines.

“Yes, there is a high likelihood that there will be some uptick as a result of the relaxations today, and that was anticipated right from the beginning of trying to lay out where the road map would go,” he said.

But if people stick to social distancing rules and they are outside, the risk of transmission is massively lower than if they are very close together and inside.

“Provided people stick to outdoors and at a distance if it’s people who are not in their households, the impact in terms of an uptick should be modest.

“I think it would not be realistic to think there will be no impact, and that is something we are all aware of.”

Prof Whitty said the “wall of vaccination” would get stronger once people receive their second doses, underlining the importance of people attending for their follow-up jab.

“It is not a complete wall, it is a kind of leaky wall. Therefore, there will always be some people who either have chosen not to be vaccinated, or where the vaccine has had much less effect,” he said. 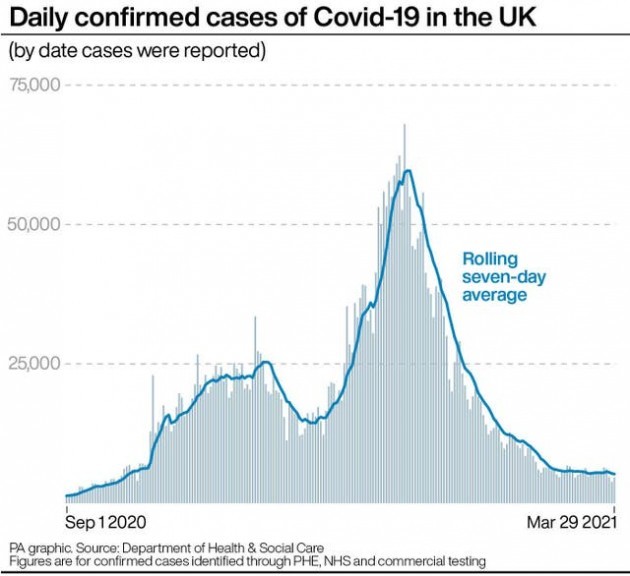 “If you get a very big wave, that would obviously lead to a significant impact. So that’s the reason why the Prime Minister and ministers have been absolutely determined that this is a slow and steady unlocking, looking at data between each step.”

Earlier, UK Health Secretary Matt Hancock said the prospect of foreign holidays had not been completely ruled out this summer.

“The door is not shut, it’s just too early to say,” he told ITV’s This Morning.

However Professor Mark Walport, a former Government chief scientific adviser, was among the experts continuing to urge caution.

“The numbers speak for themselves.”

Across England, people were swift to take advantage of the easing of the rules which meant groups of up to six, or two households, could socialise in parks and gardens, while outdoor sports facilities were able to reopen.

At Morley Hayes Golf Club, near Derby, a group of golfers celebrated by teeing off at one minute past midnight using glow-in-the-dark balls and floodlit greens.

In Wales the stay local order ended on Saturday and people were allowed to stay in self-contained holiday accommodation.

The stay home order in Scotland is to end on Friday, while in Northern Ireland up to six people, or two households, will be able to meet outdoors from Thursday.