Journalists working for Turkish media came under fire from the Armenian military after hostilities broke out over the disputed border region between Armenia and Azerbaijan, the state-run Anadolu Agency (AA) reported. 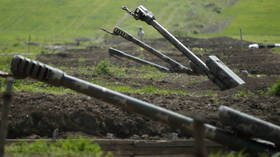 Journalists from AA and TRT, Turkey’s public broadcaster, dove behind their vehicle and then made a hurried exit from the area after Armenian artillery reportedly landed in a nearby Azerbaijani settlement. According to AA, Armenian munitions fell within 100 meters (320 feet) of the reporters.

Footage of the incident shows the journalists scrambling to find cover as a large bang rings out. Wearing protective vests and helmets, the reporters then hurriedly get into their car and drive away. AA claims that two unmanned aerial vehicles were spotted in the area before the Armenian artillery opened fire.

Hostilities between Armenia and Azerbaijan resumed along the Nagorno-Karabakh border earlier on Sunday. Officials from the breakaway region say that several civilians have already been killed in the fighting. The Armenian-populated enclave has announced that all adult males will be mobilized and martial law will be declared starting Sunday.

Turkey has thrown its full support behind Azerbaijan, with Ankara warning that Yerevan was “playing with fire” and threatened peace and stability in the region.

Armenia and Azerbaijan have been fierce rivals since both nations gained independence in the 1990s. Most of the animosity comes from the disputed Nagorno-Karabakh region, a predominantly Armenian area landlocked inside Azeri territory, which Baku considers to be under its sovereignty and Yerevan treats as an independent friendly nation. Both nations have accused each other of sparking the new violence.