President Vladimir Putin’s spokesman has rejected an idea put forward by US Secretary of State Mike Pompeo that countries should team up against China. Moscow and Bejing have spent years building closer ties. 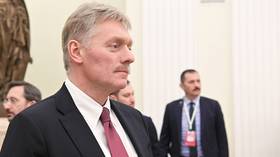 Speaking on Friday, Dmitry Peskov stated that Russia does not enter into alliances against other states, and all its political associations “are aimed at developing good neighborliness and mutual benefits,” adding that the two nations have “relations of a special partnership nature.”

On July 23, Pompeo called for a “new alliance of democracies” to oppose China, and said the US needs to work with Russia to achieve its goals on issues like arms control agreements.

“It’s these kind of things – these proliferation issues, these big strategic challenges – that if we work alongside Russia, I’m convinced we can make the world safer,” he said. “I think there is a place for us to work with the Russians to achieve a more likely outcome of peace, not only for the United States but for the world.”

Earlier this month, Russian Foreign Minister Sergey Lavrov explained that any US-China trade war is not in Russia’s interests, nor in the interests of any other state, and he expressed hope that Beijing and Washington will reach a solution through diplomatic methods.