Contrary to some Western speculation, the upcoming meeting between Russian President Vladimir Putin and his Belarusian counterpart Alexander Lukashenko has nothing to do with the two countries merging, according to the Kremlin. 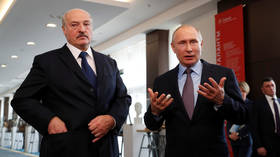 The comments come as a poll suggests only 17 percent of Russians want Belarus to become part of their country.

Speaking to journalists, Putin’s press secretary Dmitry Peskov called the suggestion “absolute nonsense.”  “No mergers, acquisitions, or so on can happen as a result of the visit,” he said.

Peskov also rejected the idea that the countries were close to joining a currency union, but voiced support for strengthening ties between the two neighboring states.

On Monday, the Kremlin announced that Lukashenko would arrive in Moscow “in the next few days,” but a confirmed date is yet to be announced.

Outside of any political speculation, the unification of Russia and Belarus does not appear to have support from the majority of Russian people. In a poll conducted by the All-Russian Public Opinion Research Center (WCIOM), only 17 percent of respondents stated that Belarus should become part of Russia. Any attempt to unite the two countries is opposed by 43 percent, with 22 percent believing the two countries should form a Union State – the union of the two countries on an equal basis.

The Union State Treaty was signed by Russia and Belarus in 1999, but many of its proposals have not been implemented. According to the agreement’s text, the nations planned to create a joint parliament, court, and cabinet. Since then, unification has regularly been discussed, including the creation of a shared currency, military, and customs space.