Leinster defeated Munster 16-6 with Jack Conan getting the game’s only try.

Garry Doyle reports from the RDS

THE WAIT GOES ON. The weight gets heavier. Nine years and ten months; it is so long since Munster last won a trophy that it happened on the same night Barcelona appeared in a Champions League final.

Or here’s a better way of making this point; it happened so long ago that Barcelona’s opponents that night were Manchester United.

The truth is Leinster deserved it. All their big players delivered whereas only a handful of Munstermen could make that claim. While they played with typical passion and commitment, somehow getting themselves level at half-time, the fact is that when it came to the business end of the field, Leinster were too sharp, too busy and ultimately too prolific.

The champions signalled their intent from kick-off, setting up camp in the Munster 22, recycling the ball efficiently, their pressure resulting in an infringement at the breakdown; Ross Byrne guiding the resulting penalty between the sticks. We hadn’t even played four minutes; Munster had still to touch the ball; Leinster letting them know that winning mattered as much to them.

They’d reinforce that point from their next attack, Andrew Porter showcasing his handling hands, Ronan Kelleher his pace as the play moved ominously into the Munster 22. Byrne kept it in there, spinning it wide to Rory O’Loughlin, the big Leinster centre. Had O’Loughlin backed himself, a try may have resulted. Instead he hesitated, his subsequent pass to Jordan Larmour proving inaccurate. 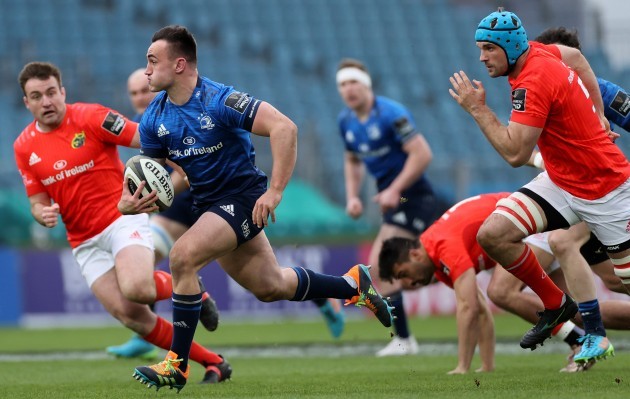 But not for long. Unable to clear their lines from the following scrum, the surrender of territory and possession would be swiftly punished, Byrne slotting over another penalty to increase Leinster’s lead to six.

Perhaps Peter O’Mahony had a word during the break in play; perhaps Munster’s players didn’t need one. But something happened as they stood still waiting for Byrne to take that kick because their response was both immediate and effective.

First to make an impact was Keith Earls, their winger who has been hanging around so long that he was one of three Munster men to feature in that 2011 win; next Damian de Allende put his hand up for work. He won a penalty at the breakdown; Tadhg Beirne got another soon after, each celebrated wildly by the Munster replacements.

You could sense something was happening. Leinster, organised and disciplined in defence, weren’t gifting any cheap points away but even so, they still coughed up three of them on 13 minutes when Jean Kleyn put in a big hit on Cian Healy; Gavin Coombes providing the follow up to win a penalty. Joey Carbery kicked it. Leinster 6-3 Munster. 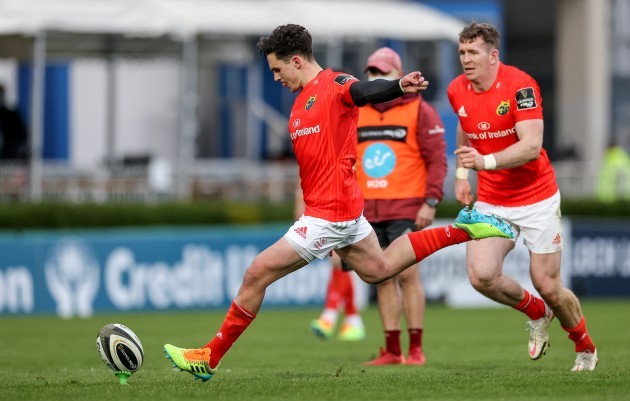 By now we knew we were in for a good game. The pace was relentless; the quality of the head-to-head contests absorbing. Robbie Henshaw v Damian de Allende; Luke McGrath v Conor Murray and especially Larmour v Earls were all worthy of a headline act on their own.

By the half hour mark, Leinster were dominating territory but unable to convert pressure into points, O’Loughlin wayward with another intended pass to Larmour; Kelleher having made a big gain with an earlier carry.

From a Leinster scrum, Henshaw delivered a timely pass into Scott Fardy’s arms; the veteran Australian held up over the line by a combination of Coombes and CJ Stander. Munster were living dangerously and when Josh van der Flier popped a subtle little pass into Hugo Keenan’s path on 32 minutes, they must have been wondering if a try was about to come.

It wasn’t. Keenan may have done everything right, offloading to the supporting Henshaw but Chris Farrell’s recovering tackle was magnificent; Earls’ ability to be in the right place at the right time just as vital, as van der Flier tried to put width on the attack.

On we went. It may have been a low-scoring half but that didn’t dilute how intriguing the contest was; Henshaw enjoying a big half, so too Porter, while Coombes played with that doggedness that is part of the Munster DNA. Gavin Coombes had an impressive game.

A missed penalty from Murray, taken from just inside the Munster half, was unfortunate; a second misplaced penalty, this time by Carbery from a much easier distance, was careless.

That one came back off the post. Still, Munster – at this stage – were making a point even if they weren’t earning any from those kicks. In possession, they continually tested Leinster, a third penalty in five minutes going their way – after Jack Conan was offside. This time Carbery found his target, the half-time whistle sounded, the teams level, the contest warming up.

There were times in the second half when it threatened to boil over, the pressure of the occasion and bitterness of the rivalry resulting in a few moments of niggle. That was of less concern to Munster, however, than the scoreboard, for by 46 minutes it had changed, Leinster going 13-6 ahead.

This score’s origins stemmed from a scrum penalty, awarded to Leinster on halfway. Byrne kicked to touch; Toner gathered the line-out; a sustained period of pressure followed, Leinster eventually winning a scrum, five metres from the Munster line.

They’d get over it; Jack Conan making the initial burst and after Rhys Ruddock arrived in support, Conan was offered a second bite at it. And this time he gobbled up the chance, getting across to record his second crucial try in a week. Byrne converted.

Like much of the first half, Munster were struggling to get a foothold in the game, irrespective of how hard they tried. When they finally did, around the hour mark, a multi-phased attack saw Beirne and Earls make slight inroads before the move broke down when Jean Kleyn knocked on.

It hardly helped their cause when they looked to the sideline where the Ireland captain and starting tight-head, Johnny Sexton and Tadhg Furlong, were warming up. As it happened, Sexton didn’t last long on the field, going off on 65 minutes for a HIA.

In his absence, Leinster kept ploughing forward. Another replacement, Ryan Baird, made a big impact after his arrival; McGrath and Conan continually threatened, one burst from Conan on 67 minutes resulting in a penalty, which Byrne – back on the field during Sexton’s head injury assessment, converted.

That left 10 points between them, time now Munster’s enemy.

To their credit, they never gave up. But at this level, effort is not enough. Leinster, again, were too good for them.