A team of researchers in Siberia’s largest city have been granted a permit by the Russian health ministry to conduct a clinical trial of their potential coronavirus vaccine. The first volunteers will be inoculated on July 27. 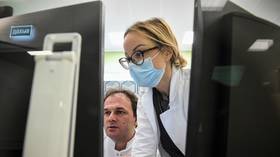 Rospotrebnadzor, Russia’s health watchdog, said the Novosibirsk-based Vektor State Research Center of Virology and Biotechnology was given the green light on Friday. The authority’s chief Anna Popova announced that her monitors were satisfied with the results of the first stage of development.

Earlier, the Ministry of Defense announced the successful completion of clinical trials of another possible Covid-19 vaccine, which it developed jointly with the Gamaleya Research Center in Moscow. On July 20, the second group of participants were discharged from hospital.

Health Minister Mikhail Murashko said he hopes that doctors and other people at risk will be able to receive inoculations as early as August.

Prime Minister Mikhail Mishustin explained on Thursday that 17 leading Russian research organizations are engaged in developing a drug to fight the disease, which has forced worldwide lockdowns, and that four options have so far proven their safety.

Mishustin added that the main thing now is to prepare production sites and to ensure that the vaccines are safe.