Belarusian leader Alexander Lukashenko dampened the hopes of those expecting a swift power transition in the country, saying change won’t take place under pressure from street protests, but in accordance with the law. 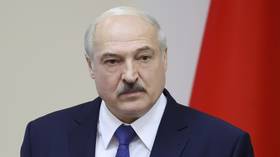 “I would like to tell you in a manly way, so as not to leave a word unspoken. I’m often reproached: ‘He will not cede power.’ This is correct. That’s not what the people elected me for,” state news agency BelTA quoted him as saying on Tuesday.

“Power is given not to be abandoned or given away. In the mid-1990s it lay in the mud. Some wiped their feet on it. And on you, those in law enforcement. Many of you remember this period. I do not want Belarus to go back to those days,” he stated at a ceremony where he introduced the country’s new prosecutor general, Andrei Shved, to his subordinates. “Nobody will dare throw mud at the authorities, contrary to what they demand.”

Lukashenko elaborated on how he sees the process of change eventually happening. “If you think that I’m holding onto power, with my hands blue with strain, for my own sake, you will strongly disappoint me,” the leader explained. “Sooner or later others will take this power, but they will do so in accordance with the law, and not under pressure from street demonstrations.”

In an interview with Russian media on Tuesday, it appeared that Lukashenko hinted that he might leave office after changes were made to the constitution, but his latest remarks suggest it won’t happen soon. He also said he has no plans to negotiate with the opposition’s Coordination Council, accusing them of wanting a “catastrophe” for the country by cutting ties with Moscow, and destroying the healthcare and education systems.