A former contender for the presidency of Belarus, Valery Tsepkalo, had fled the country with his children after being barred from candidacy in the upcoming election. He is now in Moscow. 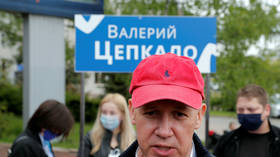 Tsepkalo was not allowed to register as a candidate in the presidential elections. Announcing his escape on Belarusian website tut.by, Tsepkalo explained that he left the country after receiving reports of his impending arrest.

“I have good friends in law enforcement,” Tsepkalo explained, adding that he went into hiding when he heard that one ‘three-letter agency’ was looking for him. After information that a second ‘three-letter’ agency was looking for him, he decided to leave the country. Tsepkalo clarified that he was referring to the KGB (the national intelligence agency) and the MVD (Ministry of Internal Affairs).

Speaking to Russian newspaper RBK, the would-be candidate explained that he chose to flee to Russia because it is the only country that shares an open border with Belarus, and he hopes that Moscow won’t extradite him to his home country.

Tsepkalo also announced his intention to do a world tour, holding press conferences in “Moscow, Ukraine, in a European country and in the United States,” to encourage the world not to recognize the “rigged” elections.

Presidential elections in Belarus will be held on August 9, and results are likely to show a landslide victory for the incumbent Alexander Lukashenko. In addition to Tsepkalo, two other candidates were disqualified from running. Viktor Babariko was detained on July 18, over allegations of tax evasion and money laundering. Sergei Tikhanovsky, a YouTuber, is also in jail on charges of obstructing elections and interfering with the work of the Central Electoral Commission.

Tikhanovsky’s wife Svetlana is one of the four candidates challenging Lukashenko. Tsepkalo’s wife Veronika has decided to remain in Belarus to help Tikhanovskaya win the election. 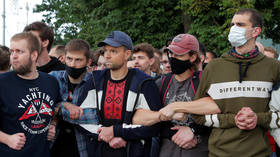