US President Joe Biden is calling for a ban on assault weapons in the wake of yesterday’s shooting. 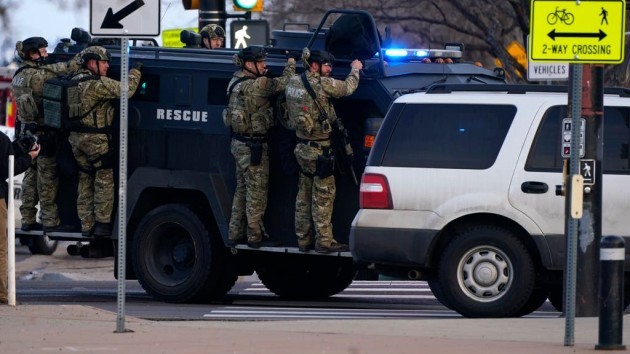 COLORADO POLICE HAVE charged a 21-year-old man with 10 counts of murder, a day after a mass shooting at a supermarket in the city of Boulder.

Herold said the suspect was hospitalised in stable condition after being shot in an exchange of gunfire with officers following the attack on Monday afternoon.

“He is charged with 10 counts of murder in the first degree and will be shortly transported to Boulder county jail,” she said.

The police chief also read out, one by one, the names of the 10 people killed in the attack, men and women aged from 20 to 65 who included a police officer and father of seven.

Police said they had not yet established a motive.

“My heart aches today,” said Governor Jared Polis. “And I think all of ours does, as Coloradans, as Americans, for this senseless tragedy, loss of life as we hear those names.”

Police said residents of the “small community” of Boulder county would be anxiously studying the list of victims for names they recognised.

“People of all ages, people who started their day, reading the morning paper or perhaps getting their kids ready… Maybe they were making last-minute spring break plans, but none of them expected that this would be their last day here on the planet,” he added.

“We will make sure that the suspect is held accountable for what he did to them yesterday,” he said. 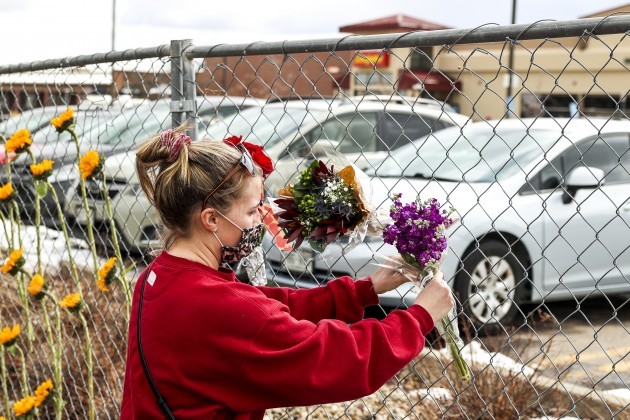 Sophia Duax places flowers on a memorial outside the King Soopers grocery store this afternoon.

At an earlier press conference, investigators said they had started sorting through evidence and witness interviews but did not yet have details on a motive for the shooting at the King Soopers store in Boulder, which is about 25 miles northwest of Denver and home to the University of Colorado.

Boulder County District Attorney Michael Dougherty said: “This is a tragedy and a nightmare for Boulder County.

“These were people going about their day, doing their shopping. I promise the victims and the people of the state of Colorado that we will secure justice.”

The attack was the seventh mass killing this year in the US, following last week’s shooting that left eight people dead at three Atlanta-area massage businesses.

The killed officer was identified as Eric Talley (51) who had been with Boulder police since 2010, Herold said.

“He was by all accounts one of the outstanding officers of the Boulder Police Department, and his life was cut too short,” Dougherty said.

Matthew Kirsch, the acting US attorney for Colorado, pledged that “the full weight of federal law enforcement” will support the investigation.

He said investigators from the Bureau of Alcohol, Tobacco, Firearms and Explosives were at the crime scene, along with FBI agents.

Officers had escorted a shirtless man with blood running down his leg out of the store in handcuffs but authorities would not say if he was the suspect at the time. 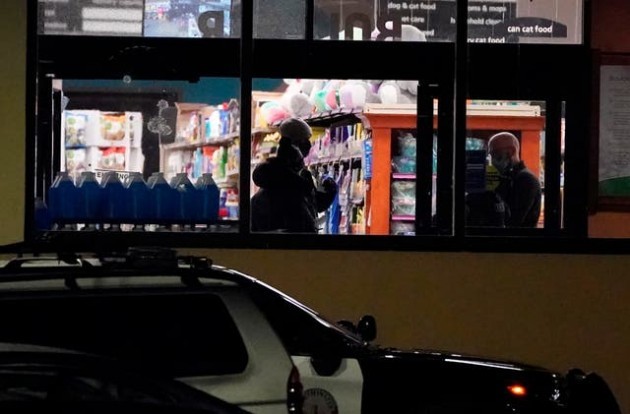 Dean Schiller told The Associated Press that he had just left the supermarket when he heard gunshots and saw three people lying face down, two in the car park and one near the doorway.

He said he “couldn’t tell if they were breathing”.

Video posted on YouTube showed one person on the floor inside the store and two more outside on the ground. What sounds like two gunshots are also heard at the beginning of the video.

Law enforcement vehicles and officers massed outside the store, including Swat teams, and at least three helicopters landed on the roof.

At one point, authorities said over a loudspeaker that the building was surrounded and that “you need to surrender”.

Colorado Governor Jared Polis tweeted a statement that his “heart is breaking as we watch this unspeakable event unfold in our Boulder community”.

US President Joe Biden called for the country to ban assault weapons, urging Congress to act on gun control in the wake of yesterday’s deadly shooting.

“I don’t need to wait another minute, let alone an hour, to take common sense steps that will save lives in the future – and to urge my colleagues in the House and Senate to act,” Biden said in an address from the White House.

“We can ban assault weapons and high capacity magazines in this country once again,” said Biden, recalling that Congress previously overcame its divisions to pass a 10-year ban on assault weapons back in 1994.

“I got that done when I was a senator. It passed,” said Biden – who was chairman of the Senate Judiciary Committee at the time.

“It was a law for the longest time. And it brought down these mass killings. We should do it again.” 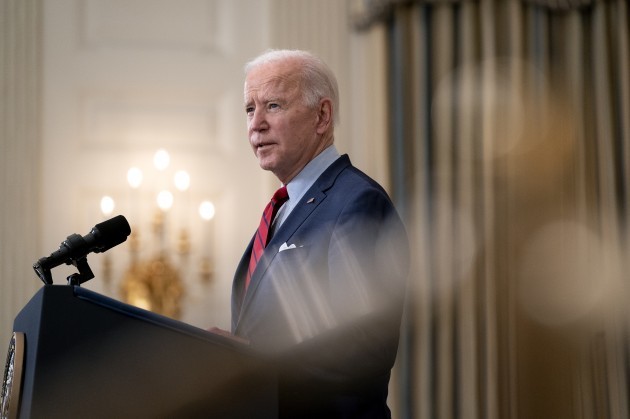 Biden delivering remarks on the mass shooting in Boulder, Colorado, in the State Dining Room of the White House

Tighter gun control is overwhelmingly popular with Americans, and championed by Biden’s Democrats, but Republicans have long stood against what a minority view as any infringement on their right to bear arms.

This month the House of Representatives passed two measures aimed at enhancing background checks and closing a loophole related to a deadly 2015 church shooting in Charleston.

The bills address a hugely popular premise among American voters: that background checks should be required for all US firearm sales, including those at gun shows.

“That’s one of the best tools we have right now to prevent gun violence,” Biden said of the legislation.

Biden said last month he wanted Congress to go further and pass laws that would require background checks on all gun sales and ban assault weapons and high-capacity magazines.

“This is not and should not be a partisan issue,” he said. “This is an American issue. It will save lives. American lives. And we have to act.”

– With reporting from AFP