With the summer holiday season in full swing, some tourists seem to have taken coronavirus with them to the coast. That’s prompted Crimea to search for more doctors as infections in crowded resorts are overloading local hospitals. 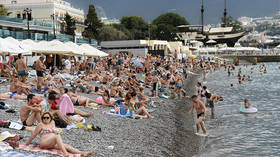 With Russia’s international borders partially closed, the Black Sea peninsula is experiencing a mass influx of travelers looking to have a domestic warm-weather beach holiday. In July, 1.43 million tourists visited Crimea, and hotels and boarding houses reported that they were 80 percent occupied.

According to official data, Crimea recorded 32 new cases of Covid-19 on Saturday, and 27 on Friday. On July 14, the number of cases sat a just 7. With a swollen summer population and an increasing rate of infection, the peninsula is in dire need of extra help.

In response to the overcrowding, the Republic’s local pandemic headquarters decided to set up a coronavirus-focused hospital, and now they need extra staff.

The new facility was due to open on Monday, but a fully-fledged start has been  hindered by a lack of staff. Speaking to Moscow daily Kommersant, a Crimean government official explained that they are short about 500 doctors and 1,500 paramedics.

“Doctors of any specialty, as well as nurse anesthetists, are urgently needed for work in the coronavirus hospital in Simferopol,” the Crimean Ministry of Health announced. Simferopol is the largest city in the peninsula, with a population of over 330,000 people.

Crimea’s hospital capacity issues have also been hindered by the late opening of a state-of-the-art medical center, due to open in December 2019, with 730 beds and 3,500 personnel. The start of operations has since been pushed back to the end of 2020.