The Jewish Museum and Tolerance Center in Moscow is at the center of a scandal after a job posting appeared saying it was looking for only ‘Slavic-looking’ applicants. The institution’s boss has slammed it as a “provocation.” 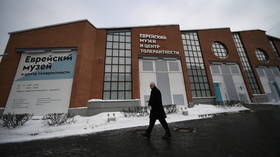 The notice showed up on Restojob, a recruitment site specialising in catering industry roles. It indicated the venue was seeking a bartender and a waiter.

Included was a line stipulating that the job would be offered to people of Slavic appearance only. A screenshot of the post, which has since been deleted, went viral on social media, prompting outrage.

The Jewish Museum and Tolerance Center  – which says that fostering “a culture of peace and cooperation, towards a positive dialogue between people of different cultures, religions, and worldviews” is one of its major goals – rushed to deny ever posting any vacancies containing such a requirement. The venue’s PR director, Nina Dymshitz, blamed it all on a “mistake” made by a partner company.

“We would never place such an ad,” she told online news site ‘The Insider,’ adding that people of all ethnic groups currently work at the center. She dismissed the idea that the venue employs only Jews as a “myth,” and said that the controversial clause in the ad was a result of “either misunderstanding or self-assertion” from the contractor that placed it.

The head of Russia’s Jewish Communities Federation, Alexander Boroda, who is also the center’s director and one of its founders, called it a “deliberate provocation.”

“Any decent sane person would … negatively react to such advertisements,” he said. The fact that the Moscow Jewish Museum was even mentioned in it was “incredibly absurd,” Boroda said, adding that “diversity is one of the core values” of this project – a principle the center expects all its staff members to share.

Russia is home to almost 200 ethnic groups and is one of the world’s most popular destinations – after the US, Germany, and Saudi Arabia – for migrant workers, with some 12 million people arriving in 2019. Although the bulk of Russian employers embrace this diversity, occasionally some job or property notices include a line stipulating that applicants must be of “slavic appearance only.”