Moscow prosecutors have approved an indictment against anti-corruption campaigner Alexei Navalny. He is accused of slandering a WWII veteran who spoke in favor of constitutional amendments, passed in a public vote, last month. 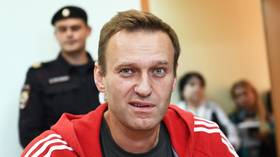 The former Moscow mayoral candidate, today a leader in the city’s protest movement, called 94-year-old Ignat Artemenko a “traitor” for supporting the amendments to the constitution. These comments “inflicted moral harm” on the former soldier, according to Lyudmila Nefedova, spokesperson for the prosecutor’s office in Moscow.

On June 2, Navalny reposted a video that showed a number of Russians encouraging a vote in favor of the package of constitutional amendments, which were proposed by President Vladimir Putin. The group, which included astronaut Oleg Kononenko, cheesemaker Oleg Sirota, and designer Artemy Lebedev, was deemed by Navalny to be the “shame” of Russia.

“Oh, here they are, darlings. You have to admit that this team of corrupt lackeys looks rather weak. Look at them: the shame of the country. People without a conscience. Traitors,” he wrote.

According to Ignat’s grandson, Igor Kolesnikov, the elderly war hero felt unwell following Navalny’s comments and had to call an ambulance. He was subsequently diagnosed with coronary heart disease.

If the court rules against him, Navalny could receive a fine of up to a million rubles ($14,300) or as many as 240 hours of community service.