Volunteers in Moscow have started to receive doses of Sputnik V, the world’s first registered Covid-19 vaccine. The formula, developed by Russian scientists, is entering the third stage of clinical trials. 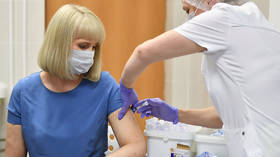 According to Anastasia Rakova, the city’s deputy mayor for social development, the first volunteers were vaccinated on Wednesday. This week’s trial participants are part of a wide-ranging final test phase, and the capital is looking observe Sputnik V’s effect on 40,000 of the city’s residents.

“The number of applicants is growing daily,” Rakova said. “More than 35,000 Muscovites have already applied.”

According to the deputy mayor, volunteers will be given the first part of the vaccine, followed by a booster shot 21 days later. All volunteers will receive both components free of charge.

On August 11, Russian President Vladimir Putin announced that the country had registered the world’s first Covid-19 vaccine. Produced by Moscow’s Gamaleya Research Institute of Epidemiology and Microbiology, the development process has been criticized by some Western countries for its supposedly unsafe rapid development and improper testing. Last week, respected British medical journal The Lancet published a study prepared by the developers of the Sputnik V vaccine, showing it to be 100 percent effective, producing antibodies in all 76 participants of early-stage trials.

On Monday, the head of the Gamaleya Institute, Alexander Gintsburg, explained that mass vaccination could lead to Russia defeating Covid-19 by summer 2021.