International law has gradually been replaced with trial by public opinion and states have become obsessed with narrative control. Information wars and “fake news” are the natural consequences and trust in the media is collapsing. 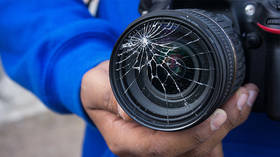 Much focus is devoted to the polarisation of media coverage in domestic politics, although what is the state of affairs in the coverage of international politics? In the current information war, all sides appear to have dirty hands. Russian media is constantly criticised, and sometimes the criticism is just. Yet, how has the information war with Russia affected the way Western media obtain, analyse and disseminate information?

If the Western media needs information about Russian troops in Ukraine, chemical weapons in Syria or any other major conflict that involves Russia – the go-to-man is Eliot Higgins, a blogger for a website called Bellingcat. Previously an employee in the ladies’ underwear industry, he gained legitimacy in the Western media by reporting exactly what it wanted to hear about Russia.

In an interview with actual experts, Spiegel magazine revealed that Higgins did not use the digital analytical tools correctly to “investigate” MH17 and his evidence was dismissed as “nothing more than reading tea leaves”. Higgins denounces his critics as Russian agents, often followed by vulgar requests to “suck his balls”. How did Bellingcat become a credible source for the media?

The media did not seem interested when to was revealed that a senior official in the Organisation for Prohibition of Chemical Weapons (OPCW) had demanded the “removal of all traces” of a document that contradicted the key “evidence” that blamed the Syrian government being behind a gas attack. Instead, the media turned to its favourite bloggers/ “analysts”.

Self-censorship was also evident when former British Navy Admiral Lord West in an interview with the BBC expressed his doubts that the Syrian government was behind the chemical weapons attack in Douma. The BBC journalist interviewing him quickly interrupted to reprimand the admiral: “Given that we’re in an information war with Russia on so many fronts, do you think perhaps it’s inadvisable to be stating this so publicly”.

Germany’s Der Spiegel magazine also poked a hole in the strange narrative about the death of Sergey Magnitsky, which led to the US passing the Magnitsky Act against Russia and pushing it on the world. The storyline that Western governments and press embraced with exuberance was concocted by Bill Browder, the man who earned the media’s love by branding himself as “Putin’s Number 1 Enemy”.

Der Spiegel recognises it is doubtful that Magnitsky was killed in a grand conspiracy, rather they point to Browder’s loose relationship with the truth, the multitude of contradictions and falsehoods about the narrative of Browder’s ‘lawyer’ Magnitsky, who it turns out was not actually a lawyer. Yet, as Spiegel notes, the thrilling anti-Russian narrative was too compelling to be obstructed by the lack of evidence.

Following the poisoning of the Skripals in the UK, the focus on Western “solidarity” similarly undermined the possibility for objectivity. Former UK ambassador, Craig Murray, had several questions that seemingly eluded the media: The Skripals had different ages, genders and weights, yet several hours after being poisoned they both passed out at the exact same time so neither of them could get help. Instead, they were found by one of Britain’s leading chemical weapons experts, the Chief Nurse of the British Army.

The information about the rescuer’s identity was revealed accidentally months after the incident and it was not clear why it was concealed. The Skripals, who survived, could be asked these questions directly but the media appears content with the government’s narrative.

The press similarly has not let facts influence the narrative over Russiagate. The servers of the Democratic National Committee were never hacked according to the former National Security Agency Technical Director Bill Binney. However, it was proven that the political party that lost the election hired the former British spy Christopher Steele, who provided the sensational and fraudulent information that kick started the investigation.

Declassified information also revealed that the FBI knew the Steele dossier was fake, representing an actual collusion that should have caught the interest of the media. Yet, the Russiagate narrative remains resilient and contesting it is classed as the gravest of all crimes – supporting the narrative of the Kremlin.

One cannot help but to get a sense of déjà vu from the Georgian conflict in 2008, when Western media reported anything the Georgian government stated as indisputable facts. Even after the EU’s Independent Fact-Finding Mission in Georgia concluded that Saakashvili had thoroughly lied, the narrative of a Russian invasion remains strong to this day.

The latest media circus over the poisoning of Navalny similarly reveals the multitude of priorities that journalists are elevating above the task of informing the public. Navalny is an anti-corruption activist who enjoys miniscule support among the Russian population and was expelled from the liberal party Yabloko in 2007 due to xenophobic statements. Although, among Western journalists his critical stance against Putin has earned him the title as a “leading opposition politician” and a place alongside Browder as another “Putin’s Number 1 Enemy” that we simply cannot resist.

The media does not attempt to answer why the Russian government suddenly decided the activist needed to be assassinated with a high-profile chemical weapon, only to be treated at a state hospital and then allowed to transfer to Germany. Yet, the consensus that appears to have formed is that the Kremlin was behind the poisoning and it is now the prerogative of NATO, an anti-Russian military alliance, to investigate and punish – although not necessarily in that order.

Past incidents indicate that the rush to consensus will not be slowed down by inconvenient facts, and the conflict between the West and Russia will continue to intensify.

The statements, views and opinions expressed in this column are solely those of the author and do not necessarily represent those of RT.