The mainstream media is still trying to drum up fear and hysteria on the basis of cherry-picked statistics. A glance at the figures is enough to prove them liars. Someone should let them know: no one is listening anymore. 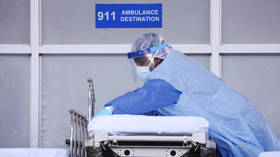 The US has recently surpassed 2 million cases, according to official figures, representing almost one-third of the world’s coronavirus infections. Much of the reporting on recent statistics features words like ‘spikes’, ‘surges’, and ‘hot spots’, but patterns in the statistics suggest that some areas have dwindling levels of the virus, while it is only now beginning to spread in others.

What can I say? They’re lying. There has been a clear and persistent drop in cases ever since the peak towards the end of April, about six weeks ago. This is just another example of MSM outlets publishing half-truths, cherry-picked statistics, and agenda-driven stories in order to push their narrative. Your best bet for getting good information is alternative outlets like this one and various lone voices on Twitter.

One such voice is that of former New York Times reporter turned novelist and pundit Alex Berenson, who tweeted on Friday to dispel this tired MSM narrative.

1/ Hey, wonder why @cnn and the rest of Team Apocalypse are screaming so hard about new “cases” (aka positive tests, which are actually falling nationally, btw)? It might because daily US Covid deaths have fallen two-thirds in six weeks. True story, not that you’ve heard it… pic.twitter.com/2tMHlMFKFa

In an apparent reference to his former ‘legacy media’ employer, Berenson’s Twitter bio reads “In the wrong lane, trying to turn against the flow.” That is a noble cause. He has been an outspoken critic of the US government’s response to the coronavirus outbreak and to lockdowns in general, and recently published an eBook entitled: ‘Unreported Truths about COVID-19 and Lockdowns: Part 1: Introduction and Death Counts and Estimates’. By definition, this puts him totally and irrevocably at odds with pretty much every mainstream news outlet, and CNN in particular.

My own view is that I could not be less interested in so-called ‘case numbers’, and haven’t been from the beginning. I take my cue from Professor Sunetra Gupta, professor of theoretical epidemiology at the University of Oxford, and one of the authors of the ‘Oxford model’, an alternative to Neil Ferguson’s apocalypse model.

Gupta said in her landmark interview with UnHerd, “the number of cases should not even be presented as it is so reliant on the amount of testing being done.” This makes perfect sense: a government that does no testing will find zero new cases, but that does not mean that the virus has not spread to new individuals. Likewise, if testing begins in a state which has previously had very little, then lo and behold, they will find a ‘spike’ in new cases.

A far better description of the outbreak can be gathered from Covid-19 deaths, “the only reliable measure,” according to Professor Gupta. There are, of course, problems with the data on Covid-19 deaths, too; Dr. John Lee argues that the way they are being counted is ‘a national scandal’, as positive tests are not required for deaths to be registered as the result of Covid-19. Furthermore, the guidance has been issued to reduce the number of autopsies, when autopsies are more important then ever.

In general, Professor Gupta’s reasoned, rational, and professional analysis of the coronavirus has been a testament to some lingering British academic excellency, which Neil Ferguson and the government toadies who take his ravings as Gospel would do well to study.

It is difficult to care about coronavirus now that Western liberal democracy seems to be entering the throes of death. Certainly protesters, rioters, and looters of all stripes do not seem to be worried about a ‘spike’ in cases—and why would they be? Most of them are young, and as such have only an astronomically small chance of dying from Covid-19 – they are about as likely to be hit by lightning.

But the mainstream media is doing their best to remind us that we are all going to die, in between the rest of their putrid jet stream of incitement to race war. The details may change, but essentially the story is always the same, whether they are hyping civil unrest, coronavirus, or climate change. No matter the issue, these media have disgraced themselves time and time again by shirking their journalistic responsibilities and scorning rational analysis in favour of maximally emotive click bait. By this point, surely not a single one of them has a scrap of credibility left. It’s time to change the record.