NATO has extended yet another in a long line of “incentives” designed to tease Ukraine with the prospects of joining the transatlantic alliance, while stopping short of actual membership. 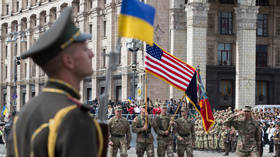 The North Atlantic Treaty Organization (NATO) has designated Ukraine as an “Enhanced Opportunity Partner,” making it one of six nations (the others being Georgia, Sweden, Finland, Australia and Jordan) rewarded for their significant contributions to NATO operations and alliance objectives by having the opportunity for increased dialogue and cooperation with the alliance.

A main objective of this enhanced interaction is for NATO and Ukraine to develop operational capabilities and interoperability through military exercises which will enable Ukrainian military personnel to gain practical hands-on experience in operating with NATO partners.

Seen in this light, the “Enhanced Opportunity Partner” status is an extension of the “Partnership Interoperability Initiative” designed to maintain the military interoperability between NATO and Ukraine, developed after more than a decade of involvement by Ukraine in the NATO-led International Security Assistance Force in Afghanistan. Thus Kiev keeps open the door for the possibility of military cooperation in any future NATO operational commitment, ensuring that Ukrainian military forces would be able to fight side by side with NATO if called upon to do so.

The designation of “Enhanced Opportunity Partner” is the latest example of NATO outreach to Ukraine, which fosters the possibility of full membership, something that the Ukrainian Parliament called its strategic foreign and security policy objective back in 2017. The current president, Volodymyr Zelensky, has likewise expressed his desire to put engagement with NATO at the top of his policy priorities.

The dream of Ukraine becoming a member of NATO dates back three decades. Dialogue and cooperation between NATO and Ukraine began in October 1991, on the eve of the collapse of the Soviet Union, when a newly independent Ukraine joined the North Atlantic Cooperation Council (NACC). NACC was envisioned as a forum for dialogue and cooperation between NATO and the non-Russian members of the former Warsaw Pact. Then came the “Partnership for Peace” program in 1994, giving Ukraine the opportunity to develop closer ties with the alliance.

In July 1997 Ukraine and NATO signed the “Charter on a Distinctive Partnership,” which established a NATO-Ukraine Commission intended to further political dialogue and cooperation “at all appropriate levels.” In November 2002 Ukraine signed an “Individual Partnership Plan” with NATO outlining a program of assistance and practical support designed to facilitate Ukraine’s membership in the alliance, and followed that up in 2005 with the so-called “Intensive Dialogue” related to Ukraine’s NATO aspirations.

In 2008 NATO declared that Ukraine could become a full member when it was ready to join and could meet the criteria for membership, but refused Ukraine’s request to enter into a formal Membership Action Plan. The lack of popular support within Ukraine for NATO membership, combined with a change in government that saw Viktor Yanukovych take the helm as President, prompted Ukraine to back away from its previous plans to join NATO.

This all changed in 2014 when, in the aftermath of the Euromaidan unrest Yanakovych was driven out of office, eventually replaced by Petro Poroshenko, who found himself facing off against a militant minority in the Donbas and the Russian government in the Crimea. The outbreak of fighting in eastern Ukraine since 2014 prompted Poroshenko to renew Ukraine’s call to be brought in as a full-fledged NATO member, something the transatlantic alliance has to date failed to act on.

There is a saying that if something looks like a duck, walks like a duck and quacks like a duck, then it must be a duck. Given its lengthy history of political and military interaction with NATO, including a decade-long military deployment in Afghanistan, Ukraine has achieved a level of interoperability with NATO that exceeds that of some actual members. US and NATO military personnel are on the ground in Ukraine conducting training, while Ukrainian forces are deployed in support of several ongoing NATO military commitments, including Iraq and Kosovo. Ukraine looks like NATO, talks like NATO, acts like NATO – but it is not NATO. Nor will it ever be.

The critical question to be asked is precisely what kind of relationship NATO envisions having with Ukraine. While the status of “enhanced opportunity partner” implies a way toward eventual NATO membership, the reality is that there is no discernable path that would bring Ukraine to this objective. The rampant political corruption in the country today is disqualifying under any circumstances, and the dispute with Hungary over Ukraine curbing minority rights represents a death knell in a consensus-driven organization like NATO.

But the real dealbreaker is the ongoing standoff between Kiev and Moscow over Crimea. There is virtually no scenario that has Russia leaving it voluntarily or by force. The prospects of enabling Ukraine to resolve the conflict by force of arms simply by invoking Article 5 of the UN Charter is not something NATO either seeks or desires.

Which leaves one wondering at NATO’s true objective in continuing to string Ukraine along. The answer lies in the composition of the six nations that have been granted “enhanced opportunity partner” status. Four of them – Ukraine, Georgia, Sweden and Finland – directly face off against Russia on a broad front stretching from the Arctic to the Black Sea. Jordan’s interests intersect with Moscow’s in Syria. Australia provides NATO with an opening for expanding its reach into the Pacific, an objective recently outlined by NATO Secretary General, Jens Stoltenberg.

NATO aspires to be a political organization, but in reality it is nothing more than a military alliance with geopolitical ambition. Its effectiveness rests in its ability to project military power, and in order to do this effectively, the military organizations involved must possess a high level of interoperability across a wide spectrum of areas, including command and control, logistics and equipment.

By extending the status of “enhanced opportunity partner” to Ukraine and the other five nations, NATO is expanding its military capabilities without taking on the risks associated with expanding its membership; Ukrainian troops can be sacrificed in some far-off land void of any real national security interest to the Ukrainian people, and yet NATO will never mobilize under Article 5 to come to Kiev’s aid on its own soil. In many ways, the relationship mirrors that of a colonial master to its subjects, demanding much while delivering little. At the end of the day, the status of “enhanced opportunity partner” is little more than that of a glorified minion who trades its own flesh and blood for the false promise of opportunity that will never materialize.