Alexey Navalny’s spokeswoman has dismissed media reports concerning his almost complete recovery from alleged Novichok poisoning, and an ensuing tightening of security, as “exaggerated” and stuffed with “factual inaccuracies.” 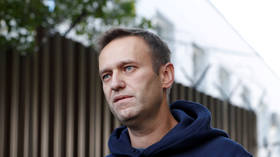 Kira Yarmysh was responding to stories published on Thursday morning by German magazine Der Spiegel and Russian website The Insider. They sensationally claimed that German police have increased security around Navalny, fearing a new attack on the Russian opposition figure. The reports were compiled in collaboration with the the US government-funded outfit Bellingcat. Russian Foreign Minister Sergey Lavrov has previously accused the latter of having links to Western intelligence services.

Der Spiegel said Navalny can speak again and that his statements could be dangerous for those who organized the alleged poisoning. It also suggested doctors were ready to allow visitors, but they would need to first pass three lines of guards.

Both publications reported that Navalny’s condition has improved. According to The Insider, he is able to recall all of the events before he became ill on a plane from Tomsk to Moscow on August 20. The piece further asserted that doctors believe the activist has already almost completely recovered mentally.

Yarmysh poured cold water on the claims. “We reported on Monday that Alexey has regained consciousness and can now react to others, but basically the article is strongly exaggerated and contains many factual inaccuracies,” she told Moscow business daily RBK.

Leonid Volkov, a long-time close adviser to the opposition figure, added: “I would be glad if what Der Spiegel wrote was true, but unfortunately, this article contains a huge number of factual errors.”

Berlin police refused to comment on reports of increased security around Navalny. “We don’t know where Der Spiegel got this data from. We don’t comment on security measures in principle,” a spokesperson informed Moscow news agency RIA Novosti.

Navalny first fell in on August 20, on board a flight from Tomsk to Moscow. The plane made an emergency landing in Omsk, where he was placed into an induced coma at a local hospital. Two days later, at the request of his wife, he was flown to Berlin and admitted to the German capital’s Charité clinic.

On September 7, German doctors announced that he had been taken out of his coma. Authorities in Berlin previously said that their experts found signs of poison from the Novichok group in the opposition figure’s system. The medical team in Omsk claims that no traces of poisoning were found before he was sent to Berlin.