Scientists from Siberia have developed a technique that effectively removes petroleum from wastewater. Using a sorbent, the new system separates impurities, meaning waste released into the environment will cause much less damage. 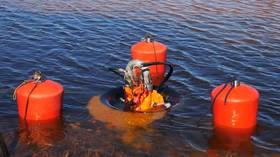 The research, published by the United Kingdom’s IOP Publishing, was conducted by scientists based in Krasnoyarsk, a large Siberian city 3,300km east of Moscow.

According to Olga Dubrovskaya, associate professor at Siberia Federal University (SibFU), cultures “eat away” at oil, cleaning the water of “impurities.” Current wastewater treatment technologies only capture about 30 percent of dangerous substances, meaning that many toxicants enter the environment and cause significant environmental damage. By contrast, SibFU’s method removes over 99 percent of all surface and emulsified oil.

The newly developed technique was tested on heat and power equipment at Krasnoyarsk CHP-2, one of the largest thermal power plants in Siberia.

“Bacteria are placed in special spores in the structure of the sorbent,” Dubrovskaya explained. The bacteria sit dormant and activate when oil is detected, at which point the water purification begins.