Here’s a stark measure of the effect ‘Euromaidan,’ and the subsequent conflict had on Ukraine. Births in the country have dropped by 40% since 2014, according to new figures published by the country’s Ministry of Social Policy. 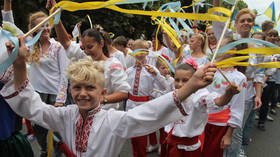 The drastic drop also coincides with a reduction in marriages and an increase in divorces, in the five years since the Maidan. The violent transfer of power led to a civil war, which has also served as a proxy conflict for foreign powers, with Russia backing the self-declared Eastern republics and the US supporting Kiev.

Ukrainians have less regularly opted to have children, with the number of newborns decreasing from 465,000 in 2014 to 330,000 in 2019. The latest figures, reported by the Ministry of Social Policy’s Ruslan Kolbasa, also show that more than 386,000 children live in difficult circumstances, and that one child in every five is born out of wedlock.

According to obstetrician-gynecologist Vyacheslav Kaminsky, the lack of new births is compounded by the lowered birthrate in the 1990s. Those born in the 90s would now be having their own children, he says.

While the average Ukrainian woman gave birth to two children during the Soviet Union, that number had dropped to just 1.09 in 2001. Following economic improvements, the birth rate per woman slowly rose again, peaking at 1.53 in 2012. However, since the economic crisis that followed Maidan, the number is falling again.

Although neighboring Russia and Belarus have too seen a drop in newborns – also due to a lack of births in the 1990s – Ukraine’s decline has been considerably more severe. According to news site strana.ua, Ukraine’s birthrate fall can be explained by the war in the east of the country and a collapse in income. The state also reduced and canceled certain child benefits.