Russia’s move to cut down on bureaucracy for those seeking citizenship seems to have been met with a high demand: in the first half of 2020 alone, about 300,000 people obtained it. 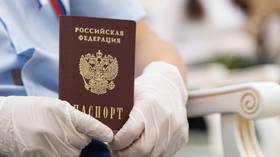 The is more than double the number for the same period in 2019, according to Valentina Kazakova, head of migration at the country’s Ministry of Internal Affairs. A total of 500,000 foreigners got citizenship last year.

“In absolute terms, about 300,000 people acquired Russian citizenship in the first half of the year,” Kazakova said, in an interview with government newspaper Rossiyskaya Gazeta. “Of course, this has been facilitated by this year’s changes in legislation.”

The increase has also come despite the complicated situation with Covid-19, the official added.

Earlier this summer, President Vladimir Putin signed a bill to end the requirement for naturalized citizens to renounce their existing passports, ending a long-standing hurdle for foreigners interested in becoming Russian. Other bureaucratic hurdles were also removed, including the need to prove a source of income.

Simplifying Russia’s citizenship law would mean “passportizing the diaspora abroad,” many of whom do not wish to lose their existing passports, Konstantin Zatulin, a member of the working group responsible for updating Russia’s migration law, said in February.

“We are interested in increasing the number of Russian citizens,” he said. “Millions of Russians live abroad and would like to become citizens of Russia.”

Changes in citizenship law aren’t the only way that Russia is changing its migration system. In May, the Ministry of Economic Development proposed that foreigners should be able to obtain a residence permit after purchasing real estate.