Russia’s ambassador to the UN Vasily Nebenzya slammed on Thursday Germany for withholding information about the health of activist Alexey Navalny and condemned Western attempts to politicize chemical weapons watchdog, the OPCW. 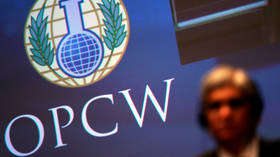 “Russia is deeply concerned by the Organization for the Prohibition of Chemical Weapons becoming an instrument in the geopolitical struggle,” Nebenzya said at the United Nations Security Council session on the use of chemical weapons in Syria.

He outlined how the OPCW had been used by Western governments to blame Damascus for alleged chemical attacks in Syria while outright ignoring evidence of actual chemical weapons use by terrorist groups.

After the ambassadors of the US, UK, Belgium, Germany and Estonia called on Russia to conduct a “full and transparent” investigation into Navalny’s alleged poisoning, Nebenzya said that it had “nothing to do with the topic of today’s discussion.”

OPCW president Fernando Arias rushed last week to declare Navalny’s alleged poisoning an instance of chemical weapons use and a “violation of international law.” German authorities have said the Russian opposition figure had been poisoned by a “Novichok-like” nerve agent during a flight from Siberia on August 20.

Reports that Berlin sent information about Navalny to the chemical weapons watchdog are “unreliable and untrue,” the Russian mission to the OPCW said on Thursday.

Moscow has also pointed to reports from the hospital in Omsk – where the activist was treated before he was airlifted to Germany by a NGO – that showed no traces of poison in his system. Germany has refused to provide any evidence to Russia.

“When it comes to the Navalny case, we are the country most interested in finding out what actually happened,” Nebenzya told the UN Security Council. Berlin’s ongoing refusal amounts to a “lack of desire to establish the truth and a provocation against Russia that undermines our bilateral relations,” he added.

On Wednesday, Russian Foreign Minister Sergey Lavrov summoned the German ambassador in Moscow to protest the “unfounded accusations” about Navalny and “the obvious use of his situation by Berlin as an excuse to discredit our country on the international arena.”

The German government and its allies within NATO and the European Union will bear full responsibility for the consequences of such a policy.

Germany has so far refused to answer the official request sent by the Russian prosecutors on August 27, asking for the details of Navalny’s treatment, diagnosis and test results, and copies of the patient’s medical records and biological materials for comparison.

The doctors in Omsk said Navalny had suffered a sudden change in blood sugar levels, but could not say what caused it. They found no traces of poison in his blood or urine, however.

The scientists who developed Novichok, a highly toxic nerve agent, have questioned the German claims that it was used on Navalny, noting that his symptoms did not match exposure at all and that people around him would have been affected.

The UK accused Russia of “highly likely” using Novichok against former double agent Sergey Skripal and his daughter – and Russian citizen – Yulia in March 2018 in Salisbury, but never provided any evidence to that effect. The Kremlin has denied the accusation.